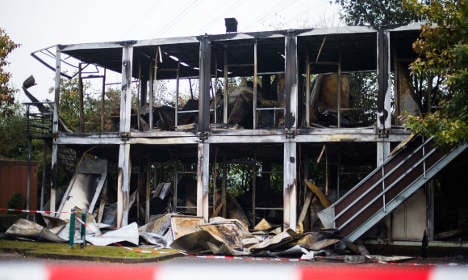 A planned refugee home after an arson attack. Photo: DPA

The BKA's warning comes in a secret document seen by the Süddeutsche Zeitung and NDR, which was written before a knife attack on the Cologne mayor, Henriette Reker, over the weekend which had an apparent far right motive.

“Especially politicians and people who look after asylum centres may be in the target group for far-right attackers,” the BKA report states.

The BKA expects far-right violence against the refugee policies of the German government will increase, adding that the otherwise “very diverse far right scene” has found an ideological consensus on the issue.

As well as arson the violent groups are using weapons such as baseball bats, slings with metal balls and butyric acid, the report states.

Spiegel also reported Thursday that the number of attacks on refugee homes for the first three quarters of 2015 had risen to 505.

The Hamburg-based website also obtained the information from the BKA.

The largest number of attacks took place in North Rhine-Westphalia (121) and most resulted in property damage.