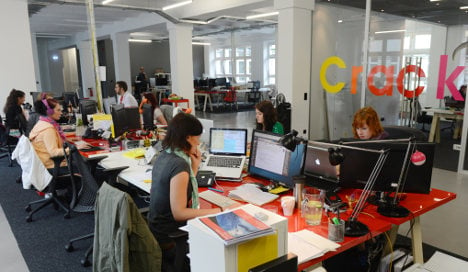 Inside the Berlin-based European headquarters of Fab.com. Photo: DPA.

Berlin came in seventh place for startups in Europe while Munich ranked tenth in the European Digital City Index of startups released on Wednesday.

The index, released on Wednesday, was created by UK-based innovation charity Nesta as part of the European Digital Forum. The index rates cities by how well they create a supportive environment for digital companies, from local business regulations to available financing to the skill level of the workforce.

London topped the charts for both startups and “scaleups” – the next step after the startup phase, where a company has figured out a good business model and wants to expand.

In second place for startups was Amsterdam, while Stockholm took second prize for scaleups.

Berlin has long been dubbed the “German startup capital” with its blossoming tech scene, and not without reason: this year's Deutsche Startup Monitor showed that nearly a third of startups in Germany reside in the German capital.

“Berlin is known worldwide as a cultural and economic hub, and it is unsurprising that features in the top-10 of this Index,” the European Digital City Index report states.

“Its numerous theatres, museums, galleries and music clubs attract tourists from all over the world, while the relatively cheap living and rental costs draw in both artistic and entrepreneurial talent.”

But the startup index on Wednesday also highlighted Munich's emerging prominence as an entrepreneurial hub.

“Munich is an industrial, financial and media hub. It has strengths in high-tech and software industries, as well as other knowledge-intensive services,” the report states.

“The presence of prestigious universities contributes to the educational and social capital of the city which is populated by a large number of well-educated people with strong purchasing power.”

Berlin didn't rank as high as tech magnets London and Stockholm in part because of its subpar digital infrastructure, according to the report, including having one of the slowest internet speeds of the European cities studied, as well as high costs for broadband – problems that Munich also suffered from.

“Some may be surprised that Berlin is not ranked even more highly, given the notable startups it has produced. However, the city is let down slightly by its digital infrastructure score and high cost of labour,” the index states.

Only Athens ranked lower than the two German cities for digital infrastructure.

The cities at the bottom of the index for startups were Bulgarian capital Sofia (33), Athens (34) and Maltese capital Valletta (35).