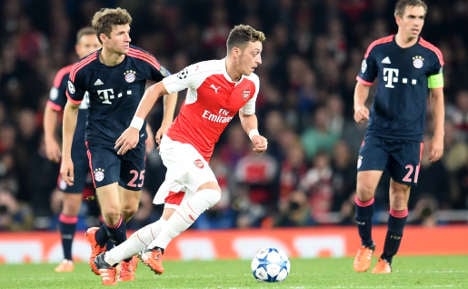 After a perfect start to the season domestically and in Europe, one might have expected Bayern Munich and the German press to have been somewhat shell-shocked by the 2-0 loss to bottom-of-the-table Arsenal.

But, hearing some of the reaction from within the club, one might have thought they had just won their 12th game in succession, adding to a record-breaking season's start.

Coach Pep Guardiola described the performance as “brilliant” and “sublime.” Captain Phillip Lahm spoke of how they “dominated the lion's share of the match.”

Only conceding to the slightest bit of weakness, Guardiola surmised that “in the Champions League you have to be perfect, we didn't quite manage that.”

Goalkeeper Manuel Neuer, who misread a cross in the 77th minute allowing Arsenal striker Oliver Giroud to knock the ball into an empty net, took the blame for the defeat.

“Unfortunately, I made an error so Arsenal took the lead,” admitted Neuer, “I don't care whether it was a handball by Giroud or not, I know I made the mistake. But life goes on.

“We played quite well, a draw would have been deserved,” he concluded.

A kind of victory

Much of the German press also refused to read too much into the defeat.

Spiegel Online described Bayern's performance as one of total dominance.

Before and after a ten minute period before the end of the first half, “Bayern had the game under control, with 70 percent possession and plenty of scoring chances.”

With Bayern still top of the table, much more concerning is the current injury list Guardiola has on his hands, writes the popular magazine.

With stars like Mario Götze, Arjen Robben and Frank Ribery all still out of action, Bayern's triumph was not adding a new player to that list in London.

“A game lost but no new injuries – when one looks at the priorities, a defeat is the less important one,” wrote Spiegel.

Munich-based Süddeutsche Zeitung said of Arsenal that they “barely had the ball and essentially only had one idea” – counter attack up the left.

Although the Bavarians were tightening the noose ever more in the second half, Neuer's uncharacteristic blunder allowed Arsenal to get their noses in front and stay there.

But other news outlets were more concerned about what the defeat means.

Die Welt described the defeat as “deserved, surprising and instructive” and said that it laid open weaknesses in central midfield, “the positions which are key to Bayern's game.”

By sending midfielders scurrying out to support full backs when Bayern were in possession, FAZ reckoned the Londoners had cut off the most potent Bayern attack – balls fired in to deadly marksmen Robert Lewandowski and Thomas Müller.