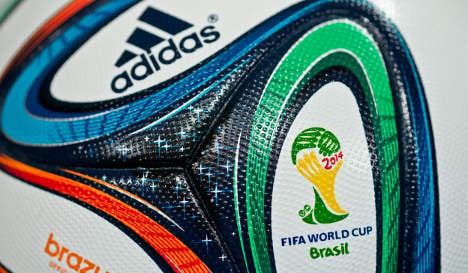 Adidas have sponsored the World Cup since 1970. Photo: DPA

At the heart of the latest graft claims to rock world football is a 10.3 million Swiss francs payment made in 2000 by Adidas's former boss Robert Louis-Dreyfus to the German Football Federation (DFB).

The magazine claimed the DFB subsequently transferred 6.7 million euros – the equivalent of the borrowed Swiss francs at the time — to a FIFA account in 2005 to repay Louis-Dreyfus.

The DFB has denied the claims, while Adidas has sought to distance itself from the case.

“We are not aware of such a payment by Robert Louis-Dreyfus,” said the brand with the three-stripes logo. “We can rule out that it was a business operation of Adidas AG.”

In other words, Louis-Dreyfus could have used his own money, and not company funds, an Adidas spokesman told AFP.

'Some impact on reputation'

Investment bank Berenberg's analyst Zuzanna Pusz warned that the German magazine's claims “could have some kind of impact on their reputation”.

No legal consequences have arisen from the case so far, as German prosecutors said Monday they were still examining whether there were grounds to launch a probe.

But the wealth of French businessman Louis-Dreyfus, who died in 2009, has been dogged by controversy.

In 2001, he transferred millions to the former president of Bayern Munich, Uli Hoeness.

The recipient has claimed it was a private gift for him to gamble on the stock market.

Critics have speculated the sum was the price to keep the prized Bundesliga side out of the reach of Adidas's US rival Nike, a claim Hoeness has denied.

This time, the charismatic businessman's dealings are being exposed at a time when FIFA is in its deepest crisis over far-reaching corruption scandals that have already left 14 football officials arrested, the governing body's chief Sepp Blatter suspended and the awarding of at least two World Cups under investigation.

Switzerland's probe into the awarding of the 2018 World Cup to Russia and the 2022 tournament to Qatar was already awkward for Adidas, the main sponsor of the games since 1970.

But with the World Cup hosted in Germany also being called into question by the Spiegel report, that is just getting too close to home for Adidas.

The German brand has a contract worth 30 million euros a year with FIFA that runs until 2030.

Until now, that investment has always paid off — in 2014, the year of the Brazilian World Cup, revenues from footballs, jerseys and other related products pushed sales of its football merchandise up by a fifth to reach 2.1 billion euros.

Beyond any immediate damage to Adidas' reputation for its association with FIFA and the World Cup, the latest corruption scandals engulfing the football world also stirs up memories of dark days for the family behind the brand.

Horst Dassler, the son of Adidas's founder, in 1982 founded International Sports and Leisure (ISL), a company that collapsed under a mountain of debt, but which had previously made a fortune after it obtained exclusive TV rights for the World Cup.

In 2012, FIFA began investigating illegal payments made by ISL and concluded that the company had paid bribes to FIFA top officials including former FIFA president Joao Havelange.

“There is an archaic system (at FIFA) with these archaic people. Television brought money and taught these people to love money,” said European football boss Michel Platini, who himself has also been suspended over corruption claims.

These links, which have resurfaced amid the FIFA crisis, are a thorn in the side of Adidas.

“Horst Dassler died in 1987,” and “ISL is owned by the Dassler family, not Adidas,” said the brand's spokesman, slapping down all association with the sportswear giant.

Nevertheless, the company would not go all the way to making a clean break with the world football body.

Unlike Coca-Cola, McDonald's, Visa and Budweiser, which have demanded that Blatter step down immediately from FIFA's top job, Adidas has so far shied away from making such calls.

After all, “FIFA is much more important for Adidas than for Coca-Cola,” said Pusz.

“Given their position in football, they would obviously have quite a lot to lose if they were to dissociate themselves entirely from FIFA.”