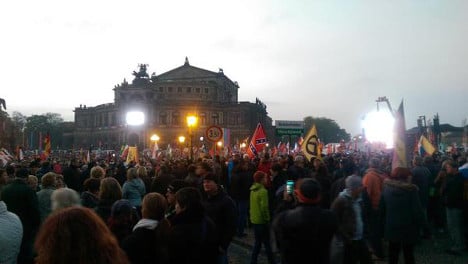 The movement emerged in the east German city a year ago, reaching a peak of around 25,000 people at its weekly rallies in January before the demonstrations started to lose support when images emerged of its leader, Lutz Bachmann, dressed as Hitler.

Pegida gained has gained more support again amid growing numbers of refugees in the country.

Bachmann kicked off the demonstration on Monday night, addressing the crowd and thanking the police officers patrolling the divide between pro- and anti-Pegida supporters.

“Welcome to first anniversary of #Pegida, I have goosebumps,” Bachmann said to a cheering audience.

While Bachmann estimated there were at least 39,000 people present, media outlets have said there were up to no more than 20,000 present.

German leaders had condemned the demonstration before it began, with Merkel warning people to “stay away from those with hate in their hearts,” her spokesman said.

Bachmann fired back during the rally, saying he wanted to bring charges against the interior minister.

Italian, Polish and English supporters of Pegida also spoke during the demonstration, in between videos showing highlights of various Pegida events.

At one point, German writer Akif Pirinçci – who has Turkish roots – came on to speak, but his statements became too much for some members of the crowd who asked him to stop.

In fairness to the #pegida crowd, Akif Pirinçci became so repulsive that they whistled and shouted stop until he left #Dresden

The Pegida supporters together sang the national anthem and later marched to the Schloßplatz.

#Pegida rendition of the national anthem. At least they're singing the modern version #Dresden pic.twitter.com/qtNqy5C6ra

The crowd started to thin before 10pm on the Pegida side.

Though the protests seemed to remain relatively peaceful throughout the night, Saxony police tweeted that one Pegida supporter was attacked by an unknown person and was seriously injured.

“Clarification: A Pegida participant was attacked by unknowns on Devirentstraße, seriously injured. An iron rod played no role!”