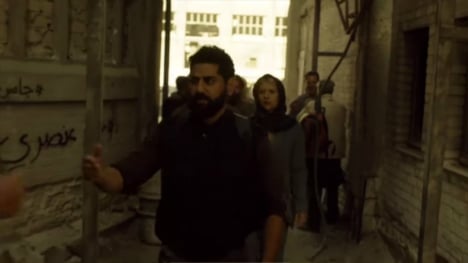 Claire Danes walking past graffiti on the set of Homeland reading "Homeland is racist". Photo: Screenshot/Showtime

“It was clear from the beginning that they had no idea of this culture,” long-time graffiti artist Don Karl – alias Stone – told The Local.

Homeland's producers had got in touch with the street art veteran hoping to commission him to graffiti the walls of a refugee-camp scene set in Lebanon.

“Since the 80s, I've worked a lot on lettering, and Arabic calligraphy has always been an important theme,” Stone explained.

“I started doing projects and workshops in Beirut and worked with artists, then it broadened out into research.”

Stone literally wrote the book on Arabic Graffiti, with the latest edition of his eponymous work published in early 2013.

And he was shocked to find that the producers of a world-renowned show, famous for its supposed accuracy, had “no idea about the culture” they were trying to portray.

“They just wanted Arabic script on the walls and didn't care if it was accurate,” he said. “Just like the whole series, it was very shallow – that was our criticism.”

Making the set their own

With fellow artists Heba Amin and Caram Kapp, Stone set about decorating the walls of the refugee camp set – in reality a former animal-feed factory in the outskirts of Berlin – with their own brand of messaging.

“This situation is not to be trusted,” they sprayed across one wall. “This show does not represent the views of the artists” on another. Top: we didn’t resist, so he conquered us riding on a donkey; bottom: The situation is not to be trusted; left: This show does not represent the views of the artists. Photos: courtesy of the artists

In other tags they went further, writing that “Homeland is watermelon [Arabic slang for a sham]”, and “There is no Homeland”. Left: There is no Homeland (mafeesh Homeland), right: Homeland is watermelon (al watan bateekh) (watermelon is a word often used to indicate that something is a sham or not to be taken seriously). Photos courtesy of the artists. Claire Danes walking past graffiti on the set of Homeland reading “Homeland is racist”. Photo: Screenshot/Showtime

Once the episode was broadcast in the USA on Sunday night, the three finally revealed how they had undermined it in a blog post.

“In their eyes, Arabic script is merely a supplementary visual that completes the horror-fantasy of the Middle East, a poster image dehumanizing an entire region to human-less figures in black burkas and moreover, this season, to refugees,” they wrote.

“Homeland has been so successful and claims to portray the truth, but it shows a totally false picture of the region,” Stone said.

“It marks the consciousness of a whole nation… Fox News has already reported on things that happened in the series as if they were fact, it has a big impact.”

What was really important for the three artists was to break into the cycle of “stereotypical and racist portrayal of Arabic and other Middle Eastern cultures. It's typically Hollywood, it's been there since the beginning,” Stone said.

In fact, across the Islamic world this week Stone has been watching a different atmosphere take hold, as people viewed the sabotaged scenes of Homeland, “laughed about it and felt Schadenfreude.”

“We got feedback from the Middle East and Arab world that people are happy about it, and that was one of our aims.

“We hope to strengthen people's consciousness that it's not realistic – but that it's more than just an entertaining TV series,” he concluded.

SEE ALSO: How well does Homeland get Germany?