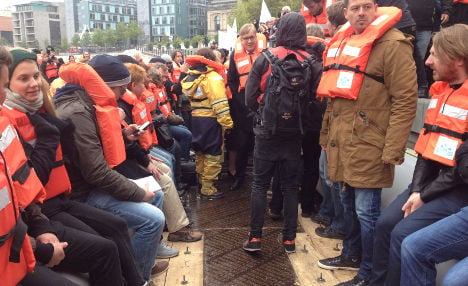 Clambering down onto the dinghy's bulging rubber edge, my legs almost gave way. I couldn't trust myself not to pitch head-first into the freezing water – but thankfully, two Sea Watch volunteers had me by the arms.

“Left,” one of the team instructed me. I staggered in the direction of his finger, glancing stupidly around. Life-jacketed MPs and journalists were already shoulder-to-shoulder around the boat's edge. Was there room for one more?

Oh yes. It turned out there was room for many, many more.

Bringing the horror home to MPs

Our captain on Tuesday was Ingo Werth.

Werth is a volunteer at Sea Watch, a force offering lifesaving aid to those crossing the Mediterranean between Libya and Italy.

He usually captains a Sea Watch vessel seeking out refugee boats in distress to offer first aid, food, water and life-rafts for between 300 and 400 people at a time.

But today's voyage was a little different. Swapping the Mediterranean for the River Spree, and the Sea Watch boat for a rubber dinghy, Werth was about to take us on a trip we wouldn't forget in a hurry.

The aim? To give German MPs – and the rest of us – a glimpse of the horrors faced by refugees crossing the Mediterranean on dinghies that just aren’t meant for the high seas.

CDU have 'shut their eyes to reality'

“We brought an original refugee boat to the Reichstag today to give MPs the opportunity to physically experience what it means to flee on one of these boats,” Ruben Neugebauer told me.

As a crew member and photographer for Sea Watch, Neugebauer had hoped to reach MPs from the Christian Democratic Union (CDU) and their Bavarian allies the Christian Social Union (CSU) – but was disappointed with the turnout from these leading parties.

“We’d hoped for more enthusiastic participation from those in charge, who approved this impossible ‘Mission Sophia,’” (the European Union's anti-people smuggling operation) he told me. “But obviously, they’ve shut their eyes to reality.”

Some MPs from these parties did come along though, he said – adding: “We hope they’ll take this experience back to their parties and tell their colleagues how it feels to have to flee on one of these boats.

“We're bringing the disastrous circumstances in the Mediterranean to the Bundestag:”

Sea Watch aids refugees in distress between Libya and Italy – but theirs is a task that wouldn’t be necessary if EU refugee policies were changed, they argue.

On October 9th, the second phase of an EU naval mission targeting human traffickers in the Mediterranean off Libya went into effect.

As part of ‘Mission Sophia,’ the United Nations Security Council gave EU naval operations authority to seize and dispose of vessels used by human traffickers in this area.

The mission aims to stem the flow of migrants and refugees into Europe.

Around 130,000 migrants have arrived in Italy since the start of 2015, The Local Italy reported earlier this month. Most of these came from Libya.

But as far as Sea Watch is concerned, targeting human traffickers is the wrong approach.

“If the German parliament thinks that the answer to the repeated disasters on refugee boats is to launch armed operations against the so-called illegal people smugglers, this just shows it isn’t properly informed on the situation in the central Mediterranean,” said Frank Dörner, chief medic at Sea Watch.

“In reaction to this, we’re trying to make tangible the desperate situation that refugees find themselves in when they have no legal way to get to Europe.”

“How many?” Werth kept shouting to those counting us on.

Hovering at the rear while the crowd thickened, I soon struggled to stay upright. “Careful,” a Sea Watch volunteer warned as I teetered backwards.

I glanced behind. The boat's outboard motor was almost touching the backs of my legs. And after that – scarily close – was the water.

“Just 41 more,” Werth announced. 41? It was already too cramped back here. Pressed up against other passengers, I couldn't twist my body into a position that felt natural.

Somehow, a space cleared for me on the rubber edge. Gratefully, I sank into it.

“Unfortunately, not many of those MPS whose opinions we really wanted to change turned up today,” she admitted.

“We would have liked more CDU and CSU politicians to come along,” she told me.

However, they did have a good turnout from the Left Party, as well as a few SPD politicians, she said.

“There was a lot of interest,” she said, with many MPs asking the team questions and having discussions on the topic.

“They told us it was a good campaign,” she said, “and that they’d now got a sense of how these people feel.”

With all seating room taken, the boat continues to fill. Photo: Hannah Butler

“We'll do a short trip around the harbour,” Werth announced, instructing us to hold on tightly and not move around too much.

He then pulled the starter cord a few times, and fired up the boat's outboard motor.

Immediately, we were engulfed in fumes. Passengers began to cough and cover their faces. But as the smoke cleared, we set off.

We can't have spent more than 10 minutes circling the harbour. Even so, the strain of keeping my torso upright and inside the boat left my core muscles aching, while my legs shook from the constant tension – and fear – coursing through my body.

Fear that my feet might lose their purchase on the slippery planks, that I’d adjust my position and end up toppling backwards into the icy river.

Fear of the growing puddle of water seeping in around my feet from the edge, and the way the back of the boat – the only thing separating us from the water – wobbled every time Werth yanked at the motor.

And fear stemming from the terrible sense that there were far, far too many people on this boat.

With 120 passengers aboard, conditions are uncomfortable. Photo: Hannah Butler

'It's very different to experience it for yourself'

Agnieszka Brugger is a Green Party MP. A spokesperson for security policy and disarmament, she is also chairwoman of the Defence Committee.

For her, the experience on the boat felt extremely oppressive. But, she told me, it was still “incomparable with what refugees making their way across the Mediterranean have to experience.”

I asked whether it had changed her views on the way people seeking refuge are brought to Europe.

Not really, she said – but “it's very different to experience it for yourself, rather than simply reading about it or talking to people who have been through it.”

“It's extremely dangerous,” she said, adding that she “couldn't imagine spending hours on one of these boats in the Mediterranean.”

One thing’s for certain: this is not a mode of transport Brugger herself would opt for.

“To me, it doesn't seem safe,” she told me, “and there have been so many fatalities in the Mediterranean.”

Brugger’s right: what we experienced on this chilly October afternoon in Berlin was nothing – absolutely nothing – compared to the treacherous journeys of the men, women and children who make the crossing between Libya and Italy.

For a start, we were all given life jackets – something most of these refugees don't have the luxury of, according to Sea Watch.

And we were only making a slow trip around the harbour.  If someone fell off, at worst they'd get cold and wet and have to buy a new iPhone. They'd get hoisted to safety straight away.

But our slow, 10-minute chug around a quiet harbour left me aching and terrified – so it's unimaginable what those who travel on similar boats for days on end go through.

There's no respite. No corner to tuck yourself away in, no solid surface to brace yourself against, and no guarantee that you'll come out alive.

How can you fall asleep knowing that one false move could send you or others tumbling into the sea for the last time?

Perhaps the worst thing, though – far worse than the lack of space and the discomfort – was how helpless the whole thing made us.

The very nature of this kind of transport turns passengers into cargo. Packed to full capacity, we were like livestock, stripped of personal space, comfort and pride.

I’m used to being able to rely on my legs to hold me up. But by the time I disembarked I was helpless, forced to stumble clumsily to the boat's edge while four men hoisted me back out onto solid ground.

After giving up their money, possessions, homes and countries, those fleeing Libya for Italy also give up responsibility for their own lives when they board one of these boats.

If my brief spell aboard taught me anything, it's that no-one would willingly opt for this. Not if there was another, legal way to safety.

These boats are dangerous, they're unsuitable, and they're terrifying.

But I suppose that's the message Sea Watch wanted to get across to German MPs who clambered aboard in front of the Reichstag on October 13th.