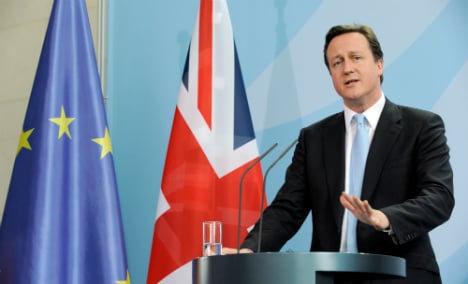 One survey of members of the British Chamber of Commerce in Germany (BCCG) found that large majorities of business leaders backed UK demands, especially those to limit EU migrants' right to claim benefits and to give national parliaments power to block EU legislation.

Meanwhile, a survey of the German public for think-tank Open Europe Berlin found that ordinary people share many of the same opinions – although with one caveat.

“We asked the questions specifically about generalized reforms that would be in force across the EU, not just things that would be 'granted' to the British,” Open Europe Berlin director Dr. Michael Wohlgemuth said while presenting the survey to journalists, including The Local, officials and business representatives in Berlin.

“These are general reforms that serve to make the EU more transparent and more subsidiary [with power located at the level of government that makes most sense],” he added.

“What Great Britain is suggesting is supported by large sections of the population. Many of them are in the German interest,” said BCCG chief executive Andreas Meyer-Schwickerath.

“They may not be shared in France and Italy, but on most questions the Germans and British are in agreement.” Asked whether national parliaments should be able to block EU laws, 61 percent of business people and 64 percent of the public said yes.

And 67 percent of business people and 64 percent of the public agreed that people moving between EU countries should not receive social benefits until they had spent some time paying into the system in their host country.

“If Chancellor Angela Merkel does make concessions to David Cameron [on these issues], that won't be too unpopular with her voters,” said Professor Manfred Güllner of the Forsa polling agency.

Majorities for both Merkel's Christian Democratic Union (CDU) and her coalition allies the Social Democratic Party (SPD) were in favour of both propositions.

This was all encouraging news for Philippa Saunders, First Secretary for EU affairs at the British Embassy in Berlin.

“There is a 20 percent difference between the 'Yes' and 'No' vote when you ask the question of Britain staying in Europe with these reforms,” she said.

That's important because Brits are unlikely to stay in just for the sake of it.

“Compromise in Britain tends to be a dirty word, it's not a good thing.”

That's why Cameron had visited Germany three times already since the UK general election in May, hoping to bring Merkel onside, Saunders noted.

Convincing Merkel personally is important. But if she follows her frequent pattern of waiting for public opinion to show itself, then following along, German co-operation with Cameron isn't guaranteed.

While almost all the business leaders – 89 percent – said they would be unhappy with Britain leaving the EU, just 55 percent of the general public agreed.

The pollsters didn't ask exactly why ordinary people were so much less concerned.

But a breakdown showed that supporters of the far-left Linke (Left Party) and far-right Alternative for Germany (AfD) were the least troubled by the idea of Brexit.

Among the mainstream parties, Green voters (71 percent) would be the least happy to see Britain leave, followed closely by the CDU (68 percent) and the economically liberal Free Democratic Party (66 percent).

That's something that worried Meyer-Schwickerath, given his view that “Europe might fall apart” if the UK were to leave.

“Without Great Britain, Germany could always be outvoted by the 'Club Med' [of southern European countries],” Wohlgemuth explained, pointing out that the Treaty of Nice's qualified-majority voting system on the European Council [of heads of state and government] expires in 2017. “You mean once the Brits are gone we can just force the Germans to buy us more gold wallpaper?”
French President Francois Hollande (r) with Italian Prime Minister Matteo Renzi (l). Photo: DPA

“With the UK, the qualified minority [including Germany] could stop the EU turning into a transfer union [redistributing cash from economically-successful countries to poorer ones] and stop it implementing a top-down industrial policy” as many French and Italians, for example, would like to see.

Meanwhile, the UK was a big positive influence on the core EU values close to Germany's heart, like pushing for a complete free market in goods and services between EU nations and striking free-trade deals with other world economic powers, Wohlgemuth said.