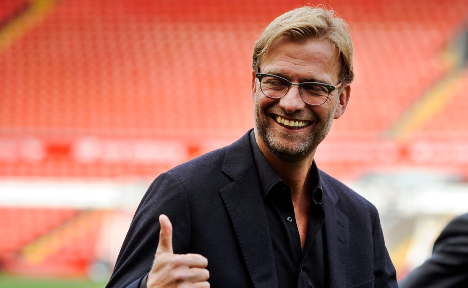 “I am convinced he will write a similar success story like he did here with us,” Watzke told German daily Bild on Sunday.

Klopp won the 2011 and 2012 Bundesliga titles and steered Dortmund to the 2013 Champions League final, where they lost 2-1, at Wembley, against Bayern Munich in the first all-German final, before he quit in May.

The 48-year-old has a contract to manage the sleeping Merseyside giants until June 2018 and will take charge of his first Premier League game against Tottenham Hotspur next Saturday.

In his first Liverpool press conference on Friday, Klopp said he wants to win 'a title within four years', which ex-Manchester United goalkeeper Peter Schmeichel said could have been an error.

“First mistake..?? Others have made the same promise! #It'sNotThatEasyMrKlopp,” tweeted Schmeichel.

Schmeichel knows what he is talking about having kept 129 clean sheets for United in 310 Premier League games and won the title five times with the Old Trafford giants.

But former United boss Ferguson, who won 13 English titles between 1992 and 2013, predicts Liverpool could become pretenders to the Premier League crown under Klopp.

“He's a strong personality, very strong, very stubborn, determined and his performances, and his career at Dortmund was a stellar rise to the top and I think he'll do very well,” Ferguson told broadcaster ESPN having met Klopp on coaching courses.
“I don't like saying that, being Liverpool, because I'm worried about it but, no, he'll do well.”

Watzke is sure Klopp will not set about boosting the Liverpool squad by raiding Borussia's squad for stars such as Marco Reus, Mats Hummels, Neven Subotic or Ilkay Gundogan.

“I am 100 percent sure that nothing will be done behind our backs and Jürgen will never do anything that may damage Borussia, because we're too close and experienced too much together,” said Watzke.

“Liverpool has many parallels with Borussia and everybody in Dortmund will cross their fingers for the Reds.”

The Dortmund CEO says he is determined to travel to see a Liverpool game at Anfield and wanted to see the match at Chelsea on October 31, but it clashes with Dortmund's Bundesliga match at Werder Bremen.

“But we'll go at the next opportunity,” added Watzke.