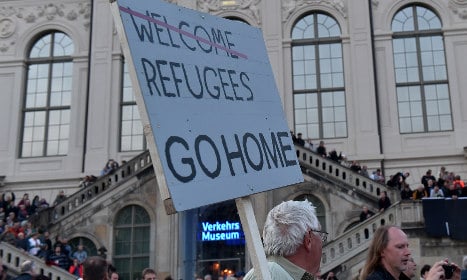 As Chancellor Angela Merkel has opened the doors to unprecedented numbers of refugees, she initially earned popular support but also quickly faced xenophobic hecklers who angrily branded her a “traitor” and worse.

Anti-foreigner fury has flared most visibly at rallies of the resurgent PEGIDA movement, short for “Patriotic Europeans Against the Islamization of the Occident.”

“Merkel is guilty, commits ethnocide against the German people,” read a banner at last week’s protest in Dresden, Saxony state, in the former communist East where PEGIDA emerged one year ago next week.

Waving flags, the agitated crowd of about 9,000 cheered co-founder Lutz Bachmann, 42, who was charged recently with inciting racial hatred by labeling migrants “animals”, “trash” and “filthy rabble” on social media.

Bachmann had drawn up to 25,000 people onto the streets in January before his inflammatory Facebook postings caught up with him, along with a “selfie” picture that showed him sporting a Hitler moustache and hair-do.

The resulting uproar led to a leadership split before PEGIDA disappeared from the streets and the newspaper headlines.

Also hoping for a revival is the populist-nationalist Alternative for Germany (AfD), once a mainly anti-euro fringe party that has shifted to the right after an internal split.

Its current leader Frauke Petry, from Saxony, called Friday for an “immediate stop” to the flow of asylum seekers into the country while her party announced it would file a criminal complaint of “human trafficking” against Merkel.

Unlike France with its National Front, Britain with the UK Independence Party, or Austria with its Freedom Party, Germany — given its sensitivity over the Nazi era and Holocaust — so far does not have an anti-immigrant party represented in its national parliament.

For most citizens, haunted by the country’s dark past, the far-right is still “taboo”, said Nele Wissmann of the Committee for Franco-German Relations in a paper last month.

But the refugee issues is emboldening the extremists. According to two recent polls, 51 percent of Germans “fear” the magnitude of the migrant influx.

As Merkel’s poll ratings have been dented by her open-border policy, the AfD has risen to 7% — above the 5% needed to enter national parliament.

It achieved its best result, 12%, in the former East — a region which a quarter-century after the fall of the Berlin Wall still lags behind the rest of the nation in terms of jobs and wealth.

And it scored 9% in southern Bavaria, Germany’s main gateway for migrants whose numbers are expected to reach one million this year.

The AfD is now “a textbook example of right-wing populism,” including in its resistance to multiculturalism, said Timo Lochocki of think-tank the German Marshall Fund of the United States.

“The party combines simplistic anti-elite rhetoric with neo-nationalist positions under the classic right-wing formula that can be summed up as ‘for the imagined glorified past of the nation, against the political establishment’.”

The last time the far-right made significant gains in Germany was in the early 1990s, when a freshly reunified Germany took in large numbers of refugees from the war-torn former Yugoslavia.

That party withered with the toughening of asylum laws in 1993.

Germany does not face national elections until 2017, but next year will see crucial state polls — in Baden-Wurttemberg, Rhineland-Palatinate and Saxony-Anhalt in the spring, and in Mecklenburg-Western Pomerania and Berlin in the autumn.

In the short term, “there will be a rise in the polls, the AfD may get 10 percent or more,” said Hajo Funke, a political scientist at Berlin’s Free University.

“Of course the far-right is gaining in strength, but it’s not automatic in the sense of ‘the more refugees arrive, the steeper the curve’.”

Rather, Funke argued, social acceptance or rejection depends on how well the influx is managed, and whether local politicians fan the flames of fear or promote granting safe haven to people fleeing war and misery.

“The AfD is especially strong in Saxony where the local conservative government for too long failed to speak out against right-wing extremists and the unleashing of resentment,” Funke said.

“In the shadow of PEGIDA we have seen a doubling of acts against asylum homes and attacks against refugees.”