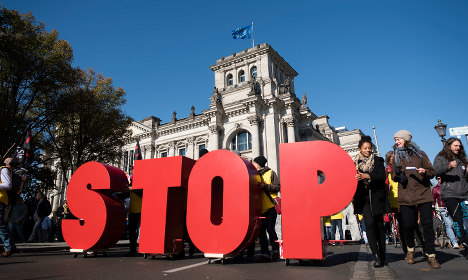 Demonstrators against the TTIP in Berlin on Saturday. Photo: DPA.

Responding to a call by a group of political parties, trade unions and environmental and anti-globalisation groups, the demonstrators gathered at Berlin's main train station for a march through the city.

Police said around 100,000 participated in the protest against the Transatlantic Trade and Investment Partnership (TTIP) under negotiation between Washington and Brussels, as well as a similar deal with Canada.

“Never before have we seen so many people take to the streets for this issue,” the German trade union confederation DGB, which helped organise the protest, said on Saturday.

Several trains and more than 600 buses had been chartered to transport protesters to the capital, who marched carrying signs that read “Stop TTIP” and “TTIP signals climactic shipwreck”.

Opponents say the deal would lead to widespread deregulation and reduce the scope of government.

“We are here because we do not want to leave the future to markets, but on the contrary to save democracy,” said Michael Mueller, president of the ecological organisation German Friends of Nature.

Talks on the pact between the US and 28-nation EU — which would be the world's biggest trade deal if completed — began in 2013 and the two sides aim to conclude them by 2016.

Campaigners are particularly angered over Washington's insistence that as part of the pact, private companies be allowed to sue governments before special tribunals.