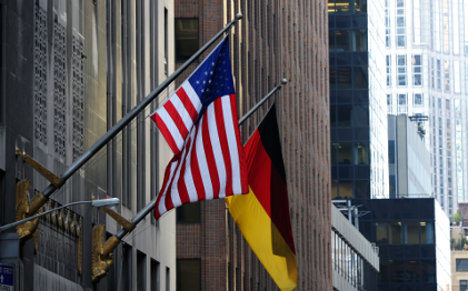 Around 50 million German Americans live in the US today, according to a 2010 census.

The largest self-reported ancestry group in the States, their numbers beat Irish, African, English, Mexican and Italian Americans – and made up around 17% of the American population in 2009.

Not bad for a colony that began with just 13 families from Krefeld.

The first Germans arrived in the US as early as 1608 – but it was the 1683 movement that truly marked the beginning of America's German settlement.

This was the year in which a group of religious dissidents approached Francis Daniel Pastorius in Frankfurt am Main.

As a trained lawyer and agent for the German Society – a group of German land investors – Pastorius seemed like a good bet to help them to buy land in Pennsylvania.

They wanted to build a settlement there. And when they arrived on American shores, that's exactly what Pastorius helped them to do.

Pastorius negotiated the purchase of 5,700 acres of land from William Penn – the Englishman who had founded Pennsylvania a few years earlier.

On this land, Germantown was born. Of course, those early settlers didn't come from Germany as it is today.

In 1683, Germany didn't exist as a country. It wouldn't do so until 1871. Instead, separate German-speaking states mostly ruled themselves as parts of the Catholic Holy Roman Empire.

But religious tensions in the German states had exploded since Martin Luther published his ninety-five theses in Wittenberg in 1517, calling people to follow the Bible rather than the Pope.

The Thirty Years' War, which broke out in 1618, was one of the most destructive in European History – and it was against this backdrop that many Germans decided to emigrate.

Carl Wahlbom's depiction of the Battle of Lützen, one of the most decisive battles of the Thirty Years' War. Image: Wikimedia Commons

The Thirty Years' War was “a major motivating factor” for Germans emigrating to America, Don Heinrich Tolzmann, Historian at the German-American Hall of Fame told The Local.

The war had a “devastating impact on Germany,” he explained, “resulting in a loss of at least one-fourth of the population, and the desire to seek a better life in the New World.”

But Germans were also attracted to America by William Penn, he said, “who traveled to Germany and spoke in Frankfurt am Main and in the Rhineland area about Pennsylvania and the religious freedom it offered.”

“This ignited interest in America and the possibility of immigration.”

When a group of Mennonites approached Pastorius in 1683, he set off to Pennsylvania himself to seal the deal.

Arriving in Mid-August, he negotiated with William Penn for the tract of land slightly north-west of Philadelphia where Germantown would be born.

He split this land between German Society investors and the Krefeld emigrants who were currently making the 74-day journey to the US.

Their ship – the Concord – arrived in Philadelphia on October 6th.

Over the next few years, Germantown grew rapidly.

As well as sharing Penn's wish to develop a commonwealth of peace, brotherly love, and religious toleration, most of the Pennsylvania Germans were skilled farmers and craftspeople.

They sold farm produce in Philadelphia, as well as setting up a successful linen weaving business.

Meanwhile, Pastorius stayed in the settlement he had created.

In 1688, he and three others signed The Germantown Quaker Petition Against Slavery, thought to be the first anti-slavery petition presented by white colonies in America. “German-American Day” was celebrated in Philadelphia for the first time in 1883 – 200 years after the Krefeld Germans landed in the US.

But when the First World War broke out, celebrations stopped.

During this period, anti-German hysteria reached fever pitch. German-Americans were brutally assaulted, while anything remotely “German” – be it books, music, even street names – was removed or destroyed.

When the War ended, over 400,000 Germans emigrated to the United States, many of them Jews fleeing the rising Nazi party.

But in a bid to hide their ethnicities, many altered their names to sound more American.

German immigrants were keen to blend in as soon as possible, avoiding the anti-German sentiment that still lingered across the US.

Hostilities rose again during the Second World War, as German-Americans found their freedom and rights restricted.

Treated as possible enemies, some were forced to carry around identification cards, while others were placed in internment camps.

While these hostilities ended soon after the war, it took German-Americans a long time to reclaim their ethnic heritage – a process that continues to this day.

In 1983 – 300 years since the Krefeld immigrants docked in Philadelphia – President Ronald Reagan proclaimed that October 6th would become German-American Day once again.

“More Americans trace their heritage back to German ancestry than to annoy other nationality,” he noted in his proclamation.

From Kindergarten and Christmas trees to hamburgers and hotdogs, German-Americans are credited with some of the most recognizable features of US culture to have emerged in the past 300 years.

Less than 5% now speak German themselves.

But along with annual Oktoberfest celebrations and the German-American Steuben Parade, October 6th is one of many ways German-Americans celebrate and remember their cultural heritage today.

Happy German-American Day! How are you honoring your heritage this October 6th? (GK) pic.twitter.com/niY2zzSYzy