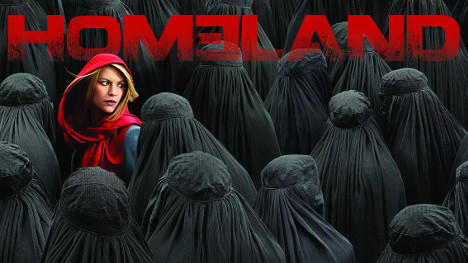 At the beginning of the episode, super-agent Carrie cycles to kindergarten with her child in a kid's seat at the back.

Berlin parents cycle their children to school using a whole range of contraptions that Claire Danes' character Carrie wouldn't likely see in the US.

From pillion seats like the one Carrie uses to transport her toddler, to bigger buggies and trailers that can sit up to three children, German kids are carted along for the ride, attached to mum or dad's bike as they whizz through the city streets.

The Local is quite skeptical about how safe these little wagons – often manufactured in bike-mad Denmark or the Netherlands – are, but they do seem to be the norm. Spot on, Homeland.

Stock photo of a brothel in Germany. Photo: DPA.

At the beginning of the episode, a hacker enters the King George, which is a real and well-known bordello in Berlin.

But while Homeland's version of the club features a venue meant for virtual sexual encounters, the real-life King George involves much more real intercourse. They even have – for want of a better term – an “all-you-can-fuck” deal available.

A German Supreme Court decision in 2000 found that prostitution was no longer “unconscionable” and a 2002 law defines the legal conditions for work in brothels, so it is not so surprising to see such places around the capital city. Saul has a meeting with German intelligence officials to discuss a security matter that they really, really don't want the public to find out about.

So of course they meet at Grosz in Ku'damm – a gourmet restaurant in the heart of Berlin's posh district, popular with celebrities like George Clooney and Brad Pitt – and of course it's empty, right? Wrong.

Surely given such sensitive information, real CIA operatives would have chosen any number of more obscure, hidden, and less popular Berlin locations to meet with their German counterparts.

Unsurprisingly for a show written by Americans, the story line draws inspiration from real life events… but seems to muddle them to make the CIA look better.

The narrative reflects the scandal that unraveled recently in Germany, where media reports revealed the close relationship between Germany and the US National Security Agency (NSA).

But the show reverses reality – the fictional German intelligence service is having Americans do the spying for them, whereas in real life the Americans had the Germans do their dirty work.

Also, the Germans on Homeland want to cut ties as soon as there's a risk of the programme going public, but actual German officials have defended the NSA collaboration – Chancellor Angela Merkel called the work necessary to “ensure the public's safety”.

Right after leaving Grosz and the Germans, Saul decides to take what is depicted as a casual little walk to interact with his black ops friend, Peter Quinn.

But Saul makes the 5.6-kilometre trek from Grosz on Ku'damm across town to Gendarmenmarkt. That's about an hour and a half walk at a leisurely pace.

In one scene, Carrie goes to get her bike on a street curb (at Zionskirchplatz in East Berlin), only to see that a woman has locked her own bike to Carrie’s. So the supposedly cultured, sharp intelligence worker – who normally takes care to show cultural sensitivity – calls out to the woman saying “Fräulein”! This is wrong on various levels.

First of all, this is a very outdated and often patronizing reference for a woman, formerly used for unmarried women. It is the diminutive of “Frau”, woman, and thus can be interpreted to mean “little woman” or that someone is not quite a woman.

Since the women’s movement of the 1970s rallied against the term, it is seldom used and certainly would not be an appropriate thing to call a stranger in the street to try to talk to them.

But on top of that, Carrie doesn’t even bother to pronounce the problematic term properly, saying “Frau-lein” and completely ignoring the umlaut. Even the most basic of German courses would have taught Carrie better.

Anyone who has even glimpsed Berlin knows that the attire for “young people” tends to be black, black, more black and beards. The techie introduced in the first episode does fit with the profile, but most monochrome-clad Berliners are probably on their way to or from Berghain (which is apparently Claire Danes' favourite place) in such attire, rather than about to hack into top secret CIA files as this man does.