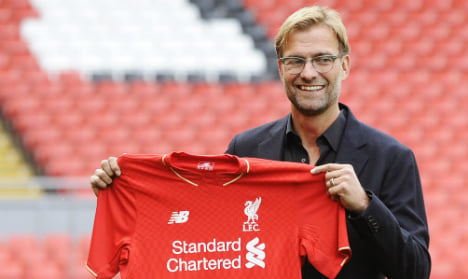 “It's a good moment to come here and I feel very proud. It's how the people here live football. It's a special club,” Klopp told reporters at Liverpool FC's Anfield stadium.

The German coach emphasized the importance of changing the mindset at Liverpool after the club's poor start to the season.

“You need to change from being a doubter to being a believer,” he said.

He also suggested that the Merseyside club's rich history is what attracted him to the job.

Liverpool have won 18 English titles and five European cups, more than any other club in English football.

“I am a football romantic. I love all the stories. Anfield is one of the best places in the football word,” he said.

Klopp also revealed that managing Liverpool had been on his mind for some time.

“The first time I came here I wondered what it would be like [to manage the club]. I am a lucky guy,” he told the crowd of journalists.

Liverpool approached Klopp in 2010 and 2012 to take over at the club, but he turned them down on both occasions due to his commitment to Borussia Dortmund.

Dortmund for their part sent their old manager their congratulations through a familiar looking image.

“It's not possible to compare two clubs [Dortmund and Liverpool]. It's a similar situation, no-one's satisfied in this moment,” Klopp said at the press conference.

“But of course it's different, we don't have a pre-season, we're in the middle of the season, some matched have already been played.

“We did in Dortmund what we had to do to improve the players, to work together with them, to work for a common idea of play, that's what we did, and that's the same thing we want to do here. It's not the same players here, they are better and more experienced in some cases, younger in others.

“The problem in football is, you can be as good as you want, you always have to play against another team and you have no influence over how good they are. But in the game, even if they're better, you can bring them onto your level.”

After being asked about his status as a manager and how he compared to Chelsea coach Jose Mourinho, who famously announced himself as “the special one” on his arrival in England, Klopp stayed more humble.

“I'm a normal guy from the Black Forest, I don't compare myself with these genius managers in the history of Liverpool, I don't think about this,” he said.