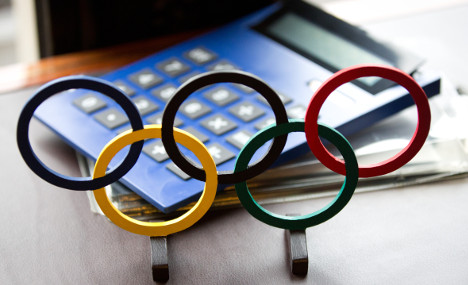 The games would cost Germany €11.2 billion overall, according to estimates. Photo: DPA

The report was presented by Hamburg mayor Olaf Scholz along with Christopp Krupp, head of the city senate, reports the Hamburger Morgenpost.

The report comes as Hamburg prepares to vote on whether or not the city should continue its bid for the 2024 games.

Overall, the games would cost Germany €11.2 billion. But only €7.4 billion of this would be funded by taxpayers, the report estimates – with the rest coming from revenue from the games.

€1.2 billion would be funded by Hamburg taxpayers, and  €6.2 billion from the rest of the federal republic.

“This is the most thoroughly calculated bid, not just in Germany but ever,” he said. “It's a great achievement.”

The predicted costs are made up of an itemized list of almost 700 items –  with  €600 million budgeted for the building of the stadium.

And with inflation and rising costs all taken into account in the estimates, these are the “highest costs” the city can expect, Scholz explained – adding: “we would rather go under budget than over budget:”

“We've always had our eyes on the British example,” Scholz said, adding that the Hamburg games would cost less than the London 2012 Olympics.

Hamburg gets the final say

On November 29th, Hamburg will hold a referendum on the city's bid for the games.

In a simple “yes” or “no” vote, Hamburg citizens will each have a chance to fill in voting slips either agreeing or disagreeing with the bid.

A simple majority for the yes vote will ratify the bid, while a no would end the city's campaign.

If this threshold is not reached, the city will be forced to withdraw the bid.

Hamburg's federal government has repeatedly stressed that taxpayers should know the potential costs of the games before this referendum, Hamburger Morgenpost reports.

The other cities competing for the 2024 games are Rome, Paris, Budapest and Los Angeles.

If Hamburg's bid is confirmed, the city will find out in September 2017 whether it has secured the games.