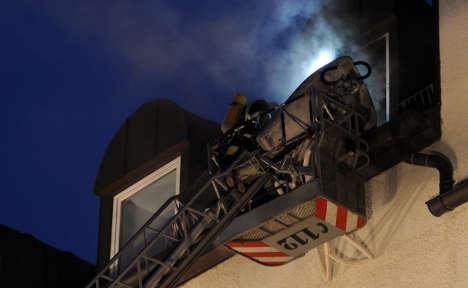 After having a fight with his girlfriend, the 52-year-old doctor took strong medication, drank large quantities of alcohol and then set their home on fire. The Munich court must establish whether this was an accident or not.

Dr. Jörg F.* was living with his girlfriend in a rented apartment in Munich's upmarket Schwabing district at the time of the incident on January 22nd 2014, reports the Süddeutsche Zeitung.

After divorcing his first wife, F., a general practitioner, had taken on extra work to cover the divorce settlement and be able to offer his new partner – “the love of my life” – “everything that she wanted.”

He worked as a locum at nights and on weekends, even working “on Christmas and during the holidays.”

To help himself sleep he took pills. When he suffered from a trapped nerve in his shoulder he swallowed pain killers and kept working.

What kept him going was his love of his girlfriend, he told the court. If he could have spent his entire day with her that would have been ideal, he said.

But things turned sour when the couple had a child together.

His partner wanted him to be there for his son, but his work stood in the way.

They began to fight. In the heat of the arguments, objects were hurled across the apartment.

On January 22nd 2014, his girlfriend broke the news – she wanted to leave him.

The doctor's reaction was self destructive. In his own words he drank “large quantities of alcohol” and withdrew into their bedroom.

In his anger at his girlfriend he took a can of green paint which was lying nearby and poured it over her side of the bed.

What happened next forms the crux of the case.

Prosecutors claim that the doctor then set light to the bed on purpose.

But F. claims that he lit a cigarette without thinking about the reaction the flame would have with the paint fumes.

“I saw a green jet of flame and quickly rushed to the kitchen to get a pot of water. When I came back the bedroom was already in flames,” he recalled.

The doctor is charged with serious arson.

*the name has been changed