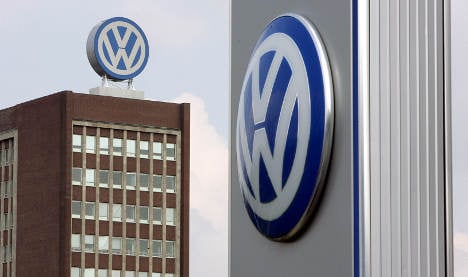 “We will this week present our proposals for technical solutions to the Federal Motor Transport Authority,” Müller told the Frankfurter Allgemeine Zeitung daily in an interview published Wednesday.

“If these are accepted, we will order the parts. If all goes off as expected, we can start the repairs in January,” he said.
The work on all cars could be finished by the end of next year, he added.

Volkswagen, which this year became the world's biggest carmaker by sales, has admitted to fitting 11 million vehicles with so-called defeat devices which detect when a car is undergoing testing and switches the engine to a low-emissions mode.

It turns off this mode when the car is back on the road, allowing it to spew out far higher emissions than permitted.

Müller said most of the vehicles affected would only need a minor adjustment in their engines but some would require major intervention, adding that these would be “of course carried out free of charge.”

He said the group would launch a huge cost-cutting programme and review several projects including its investments in football. It owns the VfL Wolfsburg football club and has investments in 17 professional clubs.

Earlier, in a speech to 20,000 staff at the group's Wolfsburg headquarters, Müller said the €6.5-billion provision the company had set aside in the third quarter due to the scandal was just the start.

“It includes the estimated cost to fix the affected vehicles,” he said.

“But it won't be enough. We must prepare for significant penalties.”

In the United States alone, VW faces up to $18 billion in fines from just the Environmental Protection Agency, plus potential payouts from class action lawsuits and fines from other regulators.

Müller also told employees the company will fight to limit the fallout on its workforce of 600,000 at over 100 plants worldwide.
“As for jobs at Volkswagen: We still do not know today what impact the crisis will have,” he said.