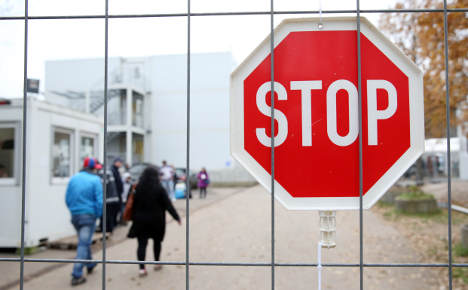 The scuffles were a fresh illustration of rising tensions between refugees at the country's overstretched reception centres.

One person was taken to hospital after being stabbed in the arm during the brawl, which involved about 60 people, a police source told AFP.

Some of those involved in the fight had armed themselves with iron bars, the source said.

Police detained an Albanian on suspicion of threatening two Afghans with a gun. After searching for the weapon, officers were unable to recover it. Two further Albanians were also detained.

By the evening, calm had returned to the venue where asylum seekers stay shortly after arriving in Germany as their cases start to be examined.

Such incidents have multiplied at refugee centres across Germany, which is expecting to receive up to a million asylum requests by the end of the year and which is struggling to accommodate everyone.

Last Wednesday, clashes broke out in two other crowded refugee centres in Hamburg, involving hundreds of Afghans and Syrians.

There was also a confrontation between 300-400 refugees at a centre in Braunschweig in Lower Saxony on Tuesday evening, the Süddeutsche Zeitung reports.

Police said that the incident was sparked over accusations of stolen possessions among refugees.

No one was injured in the confrontation and after an hour and a half around 60 police officers brought the situation under control.

One man was arrested.

The chairman of the federal police union, Rainer Wendt, accused politicians of playing down the relevance of violence and sexual assaults at refugee centres.

“It's my impression that – especially at the regional level – a lot of this is being downplayed,” said Wendt.

It is understandable that politicians try to calm the situation, said Wendt, but that when police are on the street for hours calming confrontations between refugees “that has nothing to do with rumours”

Wendt appears to have been referring to comments by Interior Minister Thomas de Maizière that unfounded rumours spread across social media were bringing all refugees under suspicion by the general public.

The union boss said that sexual assaults at refugee centres were a particular problem and that actual cases were likely to be higher than reported because many female refugees came from countries where such assaults are not considered a crime.

He added that more needed to be done to give female refugees the necessary counselling.

Tensions have repeatedly flared in over-crowded apartment blocks, army barracks, tent cities, former supermarkets and other shelters where Germany has been accommodating them.

Such trouble – though still relatively rare – has raised fears of worse to come as the inflow continues unabated and some migrants grow increasingly frustrated with long waits in tough conditions.