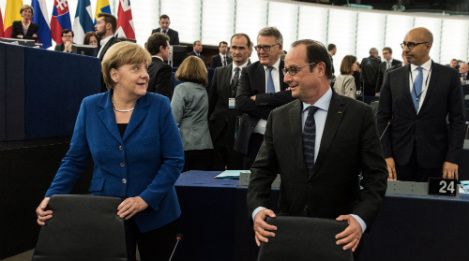 Angela Merkel and Francois Hollande before their joint speeches to MEPs in Strasbourg. Photo: DPA

“The Dublin process, in its current form, is obsolete,” Merkel said in a joint speech to the European Parliament in Strasbourg with French President Francois Hollande, calling for a new procedure to spread out asylum seekers “fairly”.

In a short, punchy speech that focused on the refugee crisis, Merkel said that Europe would need to change how it deals with refugees inside its borders, its external frontiers, and crises on its doorstep.

“We must direct our foreign and development policy more strongly towards resolving conflicts and fighting the things that cause people to flee,” the Chancellor told MEPs.

“We can only protect our external borders if we do something about the crises outside our front door.”

She added that while she understood that “no one leaves their homeland lightly” – even 'economic migrants' – Europe must prioritize those fleeing war and persecution in its asylum system.

Both leaders insisted that the solutions to the problems facing Europe – what Merkel called “a test of our abilities on a historic scale” – was not for nations to kick back against Europe, but instead to work more closely together.

“Only together will we succeed in achieving a fair distribution of refugees among all our member states,” Merkel said.

“Walling ourselves off and putting up barriers are illusory in the age of the internet.”

For his part, Hollande warned that the combined force of the different crises facing the EU could mean “the end of Europe”.

“We need not less Europe but more Europe. Europe must affirm itself, otherwise we will see the end of Europe, our demise,” he said.

“Europe was slow in understanding that tragedy in the Middle East or Africa could not but have consequences for Europe itself.”

Europe's response to its current challenges would change the Union forever, Merkel said – but it was also a chance to improve co-operation and “remove the founding mistakes of the economic and currency union”.