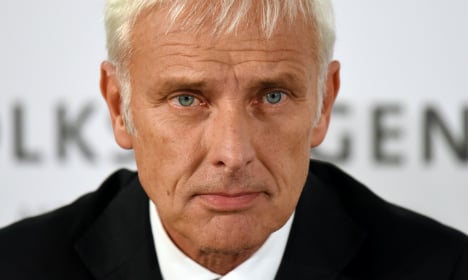 In a speech to 20,000 staff at the group's Wolfsburg headquarters, Matthias Müller said all planned investments would be reviewed, while also vowing to try to prevent lay-offs as the company struggles with the deepest crisis in its history.

“The commercial and financial consequences are not yet foreseeable,” he said. “One thing is certain: The burden will be big. Potentially very big.”

Volkswagen, which this year became the world's biggest carmaker by sales, has admitted to fitting vehicles with so-called defeat devices which detect when a car is undergoing testing and switch the engine to a low-emissions mode.

It switches off this mode when the car is back on the road, allowing it to spew out far higher emissions than permitted.

His successor, the former boss of the group's luxury sports brand Porsche, shared more bad news with his workforce in a speech on Tuesday.

Müller said the €6.5 billion the company had set aside in the third quarter due to the scandal were just the start.

“It includes the estimated cost to fix the affected vehicles,” he said.

“But it won't be enough. We must prepare for significant penalties. And many could take the events as an opportunity to claim damages against Volkswagen.”

The car chief said the company was taking a second look at all planned investments, after VW had announced a €86-billion five-year investment plan last November.

We are reviewing all planned investments once again,” he said.

“What is not absolutely necessary right now will be scrapped or postponed,” Müller told staff, adding that “every euro that stays in the company helps us”.

Müller told employees the company will fight to limit the fallout on its workforce of 600,000 at over 100 plants worldwide.

“As for jobs at Volkswagen: We still do not know today what impact the crisis will have,” he said.

“But we will fight to keep it as small as possible. And we will do everything in order to keep employees in the company.”

In Germany he said Volkswagen had flexibility and could vary work rosters and production volumes, adding that “the tight cohesion between seven locations and workforces has always helped us to cushion great hardships collectively”.

Earlier Tuesday Volkswagen said that eight million of its 11 million affected diesel vehicles were sold in the European Union.

A VW spokesman confirmed the figure to AFP, after the company mentioned the figure in a letter to lawmakers in which it apologized for the “wrongdoing of a small group of people” within the group, according to Handelsblatt business daily.

VW has vowed to get to the bottom of the scandal with an internal probe and a separate investigation led by a team of US lawyers.

By Wednesday, it must lay out a roadmap to German regulators on how it will make its cars legally compliant with emissions guidelines.

Of the eight million vehicles affected in the 28-nation EU, some 2.8 million are in Germany, 1.2 million in Britain, nearly a million in France and 650,000 in Italy, according to information previously released by the company.

In terms of brands, Volkswagen is the most affected with five million cars, but vehicles made by other companies in the VW Group also carry the deception software, among them Audi, Seat and Skoda.

In another repercussion of the VW crisis, Germany's wealthiest family has taken a major financial hit, although they remained at number one spot on the country's rich list, according to a report by Manager Magazin weekly.

The siblings Susanne Klatten and Stefan Quandt – who hold 46.7 percent of BMW shares – saw their fortune shrink to €26.5 billion, down from the family's combined wealth of €31 billion last year, as the entire German auto sector took a hit in the market over the VW crisis.