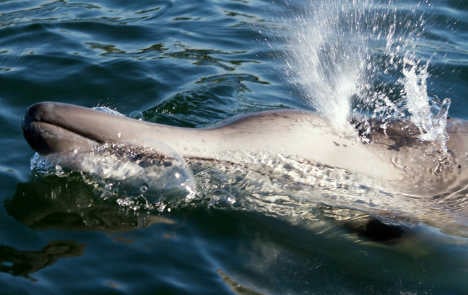 Ten days ago two fishermen found the four-metre-long whale stranded near the small town of Wismar. They were able to carry him off into deeper water, but ever since the aquatic mammal has been swimming around in a shallow bay. Fishermen save the stranded whale on Sept. 25th. Photo DPA

Now researchers from the National Maritime Museum in Stralsund are trying to encourage him to find deeper waters by imitating the sound of his species.

“We don't know if it'll work,” conceded Michael Dähne, one of the researchers.

But the scientists are already breaking new ground trying to save the North Atlantic beaked whale.

At the weekend they managed to record the call of a member of the species for the first time.

A first attempt to save the female whale failed at the weekend when researchers tried to lure the beast with her favourite dish – squid. Dähne explained that they are avoiding driving the whale out to deeper waters or coming into closer contact with her. Such “invasive methods” would only stress the animal out further, the scientist said.

North Atlantic beaked whales are seldom seen alive. In their natural habitat in the Atlantic and North Sea, they dive as deep as 800 metres hunting squid, said Harald Benke director of the Maritime Museum.

The second rescue attempt could start at the end of the week.

“The conditions have to be right,” said Dähne.

The water must be calm and it can't be raining. Rain is too much of an disturbance for the whale's sensitive acoustic system, the scientist explained.