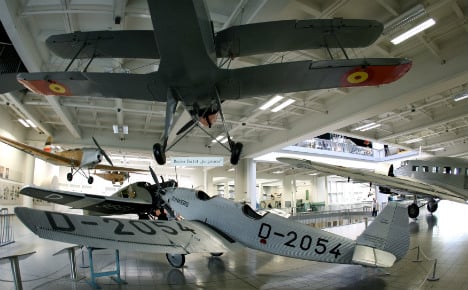 Aircraft in the air and space hall of the Deutsches Museum in Munich. Photo: DPA

“The bomb in the Deutsches Museum could not be defused on the scene. It will be transported away in the evening,” police tweeted at around 2.40pm.

Police added that Erhardtstraße, the road closest to the bomb's location on the Museumsinsel, would see its closure lifted.

A spokesperson for the fire services confirmed to The Local that moving the bomb does not pose a danger due to its mechanical detonator.

“It would need a really hard impact to set it off,” he said.

Bomb disposal specialists had begun attempting to defused the device at around 1.30pm on Tuesday afternoon.

The museum was evacuated at around midday after workers found a 250-kilo Second World War bomb underground.

The find is the front half of an American-made 250-kilogramme bomb, which disposal experts told Bayerische Rundfunk may still contain up to 40kg of TNT.

Workers discovered the 1944-vintage bomb in an inner courtyard of the museum, Merkur Online reports.

Police sealed off the area and evacuated the musem immediately after the news broke.