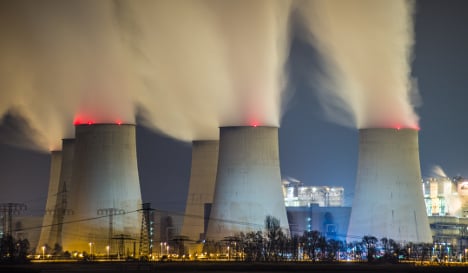 The Swedish branch of Greenpeace announced on their website on Tuesday that the group wants to place a bid to buy Vattenfall's coal mining facilities in Germany.

Sweden's state-owned power company started inviting bids last month on its German mines and plants that produce lignite – a soft, brown coal that is dubbed the most polluting fossil fuel.

Vattenfall had previously said it planned to sell its German lignite plants to make a shift toward renewable energy and reduce its carbon dioxide emissions.

Greenpeace said it wants to buy the lignite plants to make sure further production does not take place.

“Greenpeace is taking concrete action on behalf of the climate by showing its interest in Vattenfall’s lignite activities. The Swedish government cannot contribute to an acquisition by a buyer that would continue to burn enormous amounts of coal,” said Greenpeace Sweden Programme Manager Annika Jacobson in a statement.

The environmental group estimates that if the plants are sold to another buyer, it would lead to the opening of five new lignite mines that would contain an equivalent of 1.2 billion tonnes of carbon dioxide.

“Selling the lignite activities and giving the opportunity to another actor to continue with enormous emissions does not help anyone,” Greenpeace said in a statement.

The group has submitted a letter of interest to Citigroup bank, which has been appointed financial advisor in Vattenfall's sale.

According to the Financial Times, Vattenfall's lignite operations in Germany are valued at about €2 billion.

“This is an open process and all serious offers are welcome,” said Vattenfall spokeswoman Sabine Froning.

The company did not give financial details of the offer.

Greenpeace estimated its reserves at €18 million ($21 million) in its last annual accounts – or less than one percent of the valuation.

Vattenfall is the third-largest electricity producer in Germany and the east German operations employ around 8,000, in a region which still far lags western Germany in development. The lignite industry provides some 85,000 jobs in Germany as a whole.

The move comes ahead of December's UN-led climate talks in Paris, targeting a global accord to limit global warming to 2 degrees Celsius (3.6 degrees Fahrenheit) over pre-Industrial Revolution levels.

Those talks come amid heady debate the future of fossil fuels, with some analysts saying many coal mines could become stranded assets, which cannot be exploited because of environmental costs.

While Sweden tries to phase out lignite power, Germany still relies quite heavily on the fuel source with about a quarter of the country's electricity output coming from lignite, according to Die Welt.

Vattenfall said that the sale would include all production and mining assets in Germany, including power plants Boxberg, Jänschwalde, Schwarze Pumpe and Lippendorf block R as well as mining activities Jänschwalde, Nochten, Reichwalde, Welzow-Süd and Cottbus Nord.