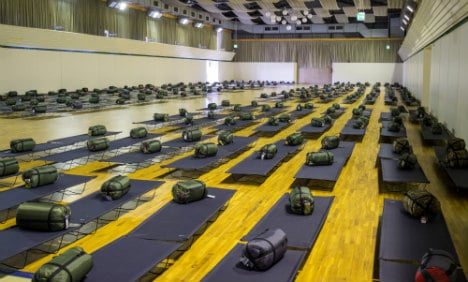 A conference hall in Brandenburg set up as temporary refugee accommodation. Photo: DPA

The poll, conducted by Initiative Markt- und Sozialforschung (Initiative for Market and Social Research) shows a big turnaround in opinion on the migrant crisis in recent weeks.

Well over half – 59 percent – of respondents thought Chancellor Angela Merkel had been wrong to allow Syrian refugees to travel unhindered to Germany from Hungary.

That was a big turnaround from the last poll on the subject, in which 66 percent of people asked said it had been the right decision to let the Syrians in.

East Germans were particularly opposed to Merkel's decision, with 69 percent – more than two-thirds – calling it a bad choice.

By contrast, the gap was narrower in southern Germany, where most refugees have been arriving.

Just over half of respondents in Bavaria and Baden-Württemberg – 55 percent – said that Merkel had made the wrong call.

The survey showed that two-thirds of Germans continue to see their country as one that welcomes immigrants, but more than three quarters of people were unhappy with how the EU has dealt with the refugee crisis.

They thought that the first EU country where refugees arrive should be responsible for taking care of them.