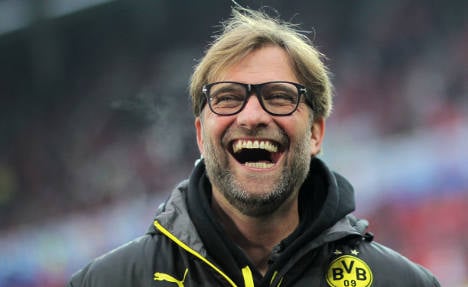 When Jürgen Klopp left Borrussia Dortmund at the end of last season, the German media was rife with speculation he would wait a season and take the Bundesliga's top job as Bayern Munich manager.

The Stuttgarter had established himself as a legend during seven trophy-laden seasons at BVB, and with Munich's Spanish coach Pep Guardiola still not fully accepted in Bavaria, the marriage between Germany's top coach and top club seemed to make perfect sense.

But this simple calculation stands in contrast to Klopp's thinking, which is stamped with loyalty to club and fans.

But going to one of the most storied clubs in world football, one with a famously passionate fan base – but one which hasn't won a domestic title in over two decades – could be just what Klopp is looking for.

It certainly wouldn't feel to dissimilar to the situation he found himself in when he joined Borrussia Dortmund in 2008. Klopp spent his entire professional playing career at FSV Mainz 05, a small club from the outskirts of Frankfurt.

In 12 playing years he became one of the club's all-time top scorers (despite playing half his career in defence) and made more appearances in the second Bundesliga than any other player in Mainz's history.

By 2001, Klopp's last season as a player, Mainz were struggling against relegation into the third tier of German football and – having gone through five managers in the span of a year – were in disarray.

So the hierarchy turned to their longest serving player, despite the fact that he lacked the necessary qualifications.

The 6 ft 4 inch hulk hung up his boots and took his place in the dug-out. The transformation was immediate, with the club winning six of their last seven matches to keep their place in the league.

For the next three seasons the revival continued. Mainz knocked on the door of promotion every year, losing out on goal difference in 2003.

The next year they made it to the top division for the first time in the club's history, and then found a route into Europe through the fair play award – another first for the club.

But relegation two years later and failure to bounce straight back up into the top league led to Klopp stepping down in 2008. Klopp and players celebrate winning the Bundesliga in 2012. Photo: DPA

Klopp was only out of work for a matter of days, as the once-great Borussia Dortmund soon came calling.

The club from western Germany's industrial heartland had been champions of Europe in 1997, but through financial mis-management had fallen into mid-table obscurity years ago.

In his first season he took the Rhinelanders to 6th in the table and beat Bayern Munich in the German Super Cup.

Klopp's haul in Dortmund is well documented: successive titles in 2011 and 2012; the highest points tally in Bundesliga history in 2011/12 (a record since bettered by Bayern Munich); the first league-cup double in BVB history – crowned by hammering Bayern 5-2 in the cup final); and the club's first Champions League final since the glory days of the mid-nineties.

The one blot on his record book was a poor last season, when a threadbare team struggled in the lower reaches of the table before rousing themsleves to finish 7th.

But the term yellow wall would have aptly applied to Klopp himself – often dressed head to foot in Dortmund's yellow and black (including a yellow baseball cap) the blond, bearded giant was a forceful presence on the sideline.

Known too for his close relationship to his players, he wasn't above riling officials and was banned from the dug out in the 2014 season for repeated abuse of a referee.

Klopp to the Kop?

So would the grinning Schwabe be a good fit for Liverpool?

Elmar Neveling, who has written a biography of Klopp, thinks so.

Speaking to Focus, Neveling said “Klopp would be really good for Liverpool. For one he speaks fluent English – which is vital for a coach like him who places great emphasis on close personal relationships with his players.

“Likewise Liverpool are a highly emotional club like Dortmund – and would fit really well with Klopp's emotional personality.”

Liverpool fans would receive him with open arms, Neveling says. “Klopp and the enthusiastic Liverpool fans, that'll be a great match – like his relationship with the south stand [in the Westfalonstadion].”

Football is an uncertain business and Liverpool fans have had their expectations raised by new arrivals on several occasions since they last won the English title in 1990, often to have them dashed before too long.

But Klopp is the longest-serving manager in the history of both clubs he's managed – if he achieves anything approaching that in north-west England, the Kop will at last be smiling again. Will Klopp join the great Bill Shankly in having his own statue in front of the Kop? Photo: DPA