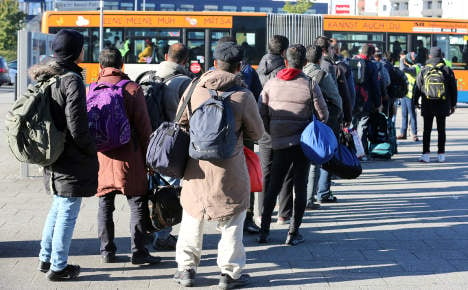 “No-one is aware of this paper,” deputy government spokesman Georg Streiter told reporters in Berlin, including Reuters, when asked about the leaked report Bild based its story on.

“That's why I wouldn't rate it so highly.”

Bild had reported on its Monday front page that up to 1.5 million refugees could arrive in Germany in 2015, according to an internal government document reporters said they had seen.

In the final quarter of the year the authorities are reckoning with an influx of close to a million migrants, Bild reported, quoting unnamed sources.

The official estimate of the government has until this point been 800,000 refugee arrivals in the whole year. In September Vice Chancellor Sigmar Gabriel admitted that number could rise to 1 million.

According to the report the refugee receptions services are on the point of collapse.

Necessary utilities such as containers to live in and clean housing are already in short supply.

Local authorities complain that they are stretched to breaking point.

“If the influx continues at this rates the local governments in Germany will be overstretched in the tasks of taking care of, housing and integrating refugees,” Gerd Landsberg, chairman of the federation of local governments told the Passauer Neue Presse on Monday.

Lorenz Caffier, interior minister in Mecklenburg Western Pomorania also told Welt am Sonntag that between 1.2 million and 1.5 million refugees are expected to arrive in Germany during the course of the year.

Interior Minister Thomas de Maizière refused to give figures saying it was very difficult to be sure of precise numbers because “a not inconsiderable number” of refugees withdraw their asylum applications, or move on after registering.