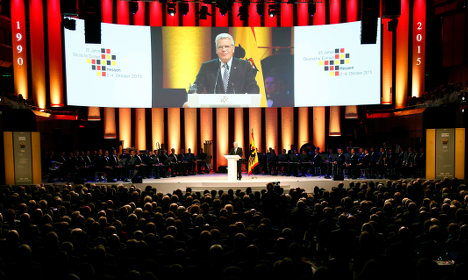 German President Joachim Gauck makes a speech during the celebrations in Frankfurt of the country's 25th anniversary since the reunification of East and West Germany. Photo: DPA

The silver anniversary of the day communist East Germany and the capitalist West reunited as one country comes with Europe's top economy standing at a crossroads.

Chancellor Angela Merkel and President Joachim Gauck, both of whom grew up under communism, attended ceremonies in the business capital Frankfurt with the resonant slogan “Overcoming Borders”.

In the keynote speech, Gauck focused on the refugee crisis and called on Germans to recapture the same can-do spirit that gripped the country in the heady months between the fall of the Berlin Wall and the remarriage of east and west.

“Today we celebrate the courage and self-confidence of that time. Let us use this memory as a bridge,” said Gauck, who was a dissident pastor in East Germany.

“In 1990 too, there was the legitimate question: 'Are we up to this challenge?' Then too, there was no example from history to follow. And nevertheless, millions of people took on the national task of unification and made Germany into a country that was more than the sum of its parts.”

Merkel, who will mark 10 years in power in November, is grappling with the arrival this year of up to one million people fleeing war and hardship.

Buoyed by a robust economy and job market, voters have largely backed her policy of extending help.

Volunteers have greeted hundreds of thousands with open arms and mountains of donated essentials in moving scenes that Merkel has said made her “proud of this country”.

However as the numbers have grown, Merkel's popularity has slipped as she comes under fire from critics at home and abroad for her willing acceptance of the burden on Europe.

Merkel on Saturday said the migrant crisis represented an epochal test for the European Union.

“Twenty-five years on, we are facing great challenges with the issue of refugees,” she told reporters in Frankfurt.

“Now too, we Germans will not be able to solve the problem on our own but only with Europe, with a fair division of the burden, and with the rest of the world.”

She said earlier in her weekly podcast that this must include a range of measures including protection of Europe's external borders, development aid and conflict resolution in the refugees' countries of origin, and smoother distribution of newcomers within the EU.

Some countries have resisted Berlin's bid for the mantle of European leadership, however, with Hungary's hardline Prime Minister Viktor Orban even accusing Merkel of “moral imperialism”.

Gauck expressed understanding for the fears of eastern European countries that do not have experience in integrating foreigners, unlike that acquired over generations in the west.

“This recognition should make it easier to respect the experiences of other nations,” he said.

On October 3, 1990, just under a year after the Berlin Wall was pulled down in a bloodless revolution, the reunification treaty bringing the two halves of the country together came into effect amid jubilant scenes.

Ever since, this date has been a public holiday to mark Germany's national day.

The anniversary festivities were carrying on throughout the weekend in Frankfurt, with pop bands, fireworks and an art installation on the Main River illuminating 25 bridges.

And thousands joined a street party in Berlin at the Brandenburg Gate, the symbol of German unity.

Sixty-six percent of Germans say reunification was the right decision. But 71 percent of westerners and 83 percent of easterners argue that “major differences” endure between the two halves, opinion research firm YouGov said.

Unemployment remains higher in the eastern states than in the west, but the spread has shrunk to nine percent versus six percent.

Social differences abound too, with far more eastern children born out of wedlock and enrolled in daycare.

A schism can be seen on the issue of refugees too, with vandals' attacks on refugee shelters disproportionately focused in the east, where populist anti-migrant groups have gained a foothold.

In Frankfurt, the festivities were marred by a protest when around 70 people calling for more generous asylum laws stormed a festive tent set up by the Bundesrat upper house of parliament.