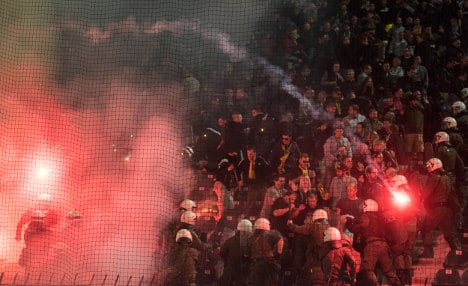 Robert Mak's goal at the 34-minute mark gave the home team the lead heading into half time.

But things turned violent in the second half of the game, reports Frankfuter Allgemeine Zeitung.

Shortly after half time, play was halted as fans lit flares in the BVB stand.

As police intervened, flares were thrown at officers and paramedics.

BVB boss Hans-Joachim Watze spoke clearly of his frustration after the match.

“Such behaviour cannot be tolerated,” he  said.

BVB coach Thomas Tuchel added: “Our side was the one to begin with the fire attacks. It's extremely frustrating, and something we're not happy about.”

After the violence died down, play continued – and a goal from BVB's Gonzales Castro leveled the scores with 18 minutes remaining.

But tensions rose again after the final whistle, with PAOK fans storming the Dortmund block.

The chaos left the German team uncertain whether to greet fans after the game, BVB said in a press release.

But after an on-pitch discussion, the team decided to thank fans for their support.

The players knew that it was “a small minority causing the chaos,” said Tuchel.

“The other 1,300 fans deserved the team to go over and thank them for their support. However, I can completely understand the question of whether they might have decided to take a stance.”

In the wake of the disruption, Watzke admitted: “We need to review what happened.”

“We will be given another hefty fine for this,” he explained, adding: “If you disrupt a match, then you've crossed the line.”