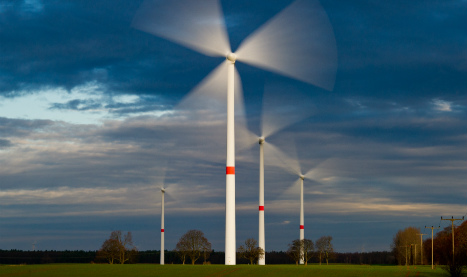 Wind turbines in a field in Brandenburg. Photo: DPA

The cumulative total production from land-based and offshore wind farms so far this year was 59 billion kilowatt hours, topping the 57.4 billion kilowatt-hours (kWh) for all of 2014.

Wind power's share of national electricity output rose to 12.9 percent between January and July, from a share of 8.9 percent for all of last year.

Almost every month saw a year-on-year rise, said the German Association of Energy and Water Industries (BDEW) and the Centre for Solar Energy and Hydrogen Research Baden-Wurttemberg (ZSW).

“The rising generation of electricity from wind power and the growing number of facilities are an important contribution to achieving the objectives of the energy transition,” said BDEW chairwoman Hildegard Mueller.

Germany in 2011 decided to end nuclear energy production by 2022, while also switching from fossil fuels to clean energy this century.

By 2050, it aims to meet 80 percent of electricity needs with renewables such as wind, solar and biogas, which now generate around a quarter.

Mueller hailed the progress but called for faster development of the transmission and distribution systems for clean energy, to get the power from the regions where it is generated to the cities and factories where it is needed.