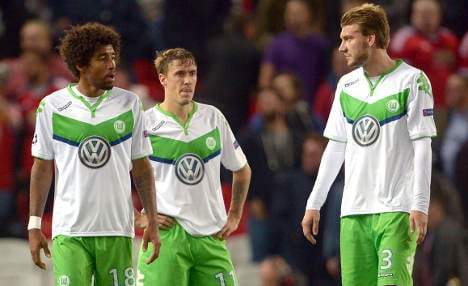 Wolfsburg fell to a 2-1 defeat away to Manchester United in the Champions League on Wednesday to mean the English club caught them in the league table.

The group is on a knife edge, as after two games all four sides lie on three points.

Beaten 2-1 at PSV Eindhoven in their opening game, Manchester United fell behind to a fourth-minute Daniel Caligiuri goal at Old Trafford before Mata rode to the home team's rescue.

The Spain midfielder won and scored a 34th-minute penalty and then set up Chris Smalling with a stunning improvised flick eight minutes into the second half to give improving United a fourth consecutive victory.

Wolfsburg's defeat to United, coupled with PSV's 3-2 loss at CSKA Moscow, left them in a four-way tie for first place in Group B ahead of PSV's visit on October 21.

Wolfsburg finished the game strongly but could not prevent a fourth successive defeat in England, which left last season's German Cup winners and Bundesliga runners-up without a win in three matches.

“We lacked a bit of luck at the end,” said Wolfsburg coach Dieter Hecking. “But I'm confident we can build on tonight's strong performance.”

Having opened their debut Champions League campaign with a 3-0 defeat at Sevilla, which included two penalties, Gladbach remain bottom of Group D as they search to replace ex-coach Lucien Favre.

The result is a set back for Gladbach after their first defeat under caretaker coach Andre Schubert following two Bundesliga wins since Favre quit on September 20 after five German league defeats.

This was Borussia's first European match at this level for 37 years and their first defeat to English opposition at home on the continent in six matches.

“The bottom line first of all is how disappointed we are to have not taken anything from this game,” said Schubert.
“We kept in the game, defended well, but we still lost.”

City are now third only on goal-difference after leaders Juventus enjoyed a 2-0 win at home to Sevilla on Wednesday as Manuel Pellegrini's Citizens bounced back from their opening 2-1 defeat at home to the Italians.

After striker Lars Stindl had put Gladbach ahead at Borussia Park, City came from behind as Andreas Christensen's own goal put the English team level before Aguero's late spot-kick.

The win breathes life back into City's European aspirations as they bounced back from their 4-1 mauling at Tottenham Hotspur in the Premier League on Saturday.