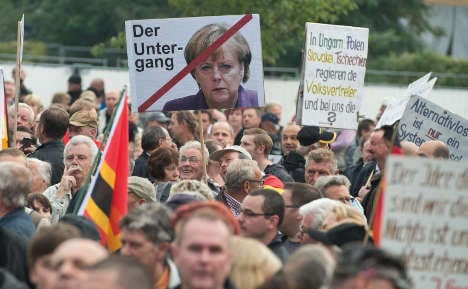 “There have been worrying developments as regards public manifestations of racism and xenophobia,” the Council of Europe's committee on national minorities said in a statement.

“Manifestations of anti-Semitism and anti-Muslim and anti-immigrant sentiments are… reported to be rising, as well as attacks against asylum seekers,” the report said.

It specifically referred to the Monday marches organised by the anti-Islam PEGIDA movement last winter, which at its height drew crowds of up to 25,000 in the eastern city of Dresden, although support for the movement has since fallen.

While there were large counter-demonstrations and official statements in support of diversity and mutual respect, “sustained efforts are still needed to foster a climate of tolerance and intercultural dialogue,” the council said.

The report — which was adopted in March but only released on Thursday – also highlighted the “heinous fatal stabbing” of an Eritrean man in Dresden on the evening of one far-right demo, days after the door of his flat had had a swastika painted on it.

The report's conclusions contrast sharply with the images in recent weeks of trainloads of migrants and refugees, many from Syria, arriving to a warm welcome at German railway stations.

A record 270,000 to 280,000 refugees entered Germany in September, more than the total for 2014, said the interior minister of the southern state of Bavaria on Wednesday.

As Germany expects up to one million new arrivals this year, Chancellor Angela Merkel's generosity towards asylum seekers has sparked discord within her coalition.

However, according to recent opinion polls, more than 60 percent of Germans are in favour of such migrants being welcomed into the country.

The Council of Europe report, based on data from 2010-2015, acknowledged “continued efforts… to promote tolerance, combat racism and prevent right-wing extremism in German society,” notably through school programmes.

Yet it added that debates on so-called “poverty migration” have had a damaging effect, and racist slogans targeting Sinti and Roma have also been used in election campaigns without being found to breach the prohibition on incitement to hatred.

The council's advisory committee called on Germany to stop the practice of ethnic profiling and “take steps to build trust between persons belonging to minorities and the police”.