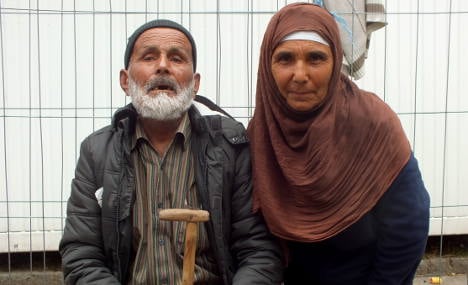 The old Afghan man and his daughter. Photo: DPA

Police announced on Wednesday that a nine-member family which included four children, a pregnant woman and a the 110-year-old man reached the Bundesrepublik on Sunday.

The man's 60-year-old daughter said that he had been born on January 1st 1905. He is also reportedly deaf and blind.

The old gent's age cannot be verified by authorities because the family didn't have documents with them.

“Even if the man is 90, that trip was one heck of a journey,” said police spokesperson Werner Straubinger.

An interpreter said that the story was believable, describing how at the family's registration, the old man was bent over his stick and could only take a few slow steps.

If the story is true, the old Afghan may just have become Germany's oldest inhabitant after 111-year-old Charlotte Klamroth passed away in May.

The daughter described how the flight from Baghlan just north of Kabul took a month. The younger men took turns to carry their most senior family member on countless treks through around a dozen countries.

They had fled Afghanistan because three of her brothers had been killed by the Taliban and the situation was becoming increasingly unstable, the woman said.

Police confirmed to The Local on Wednesday afternoon that the family travelled on to a refugee centre in Hesse earlier in the day and that the centenarian appeared to be in good health.