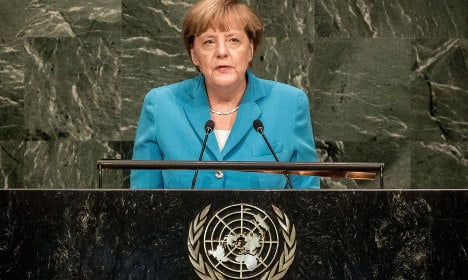 Meeting on the sidelines of a UN development summit, the so-called G4 said they were “legitimate candidates” to become permanent Security Council members and backed each other's candidacy.

“A more representative and effective Security Council is needed more than ever to address the global conflicts and crises that (have) spiraled in recent years,” said a statement by the four leaders.

There have been mounting calls for changes to the powerful UN council which has been deeply divided over how to address the war in Syria, now in its fifth year with more than 240,000 dead.

Merkel met with Brazil's Dilma Rousseff, Indian Prime Minister Narendra Modi and Japanese Prime Minister Shinzo Abe who agreed that a new round of talks on changes to the Security Council should yield results.

The UN General Assembly earlier this month agreed on a negotiating text on Security Council reform, but China, the United States and Russia refused to sign on to the initiative.

The three countries along with Britain and France are the five veto-wielding permanent members of the council, while the 10 other seats rotate among UN member-states.