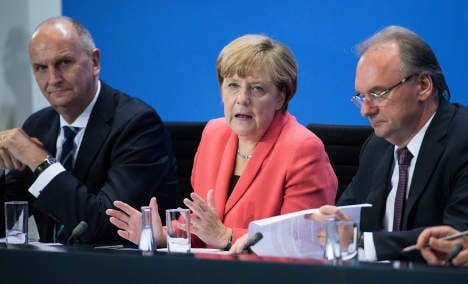 While the federal government agreed to take much of the financial burden of providing for refugees away from the sixteen German states, Merkel and the state leaders also agreed to sharpen the conditions for granting asylum in Germany.

Merkel agreed to give the federal states an extra €1 billion in 2015, plus €4 billion to cope with the crisis in 2016 instead of the previously agreed upon €3 billion.

With the extra money the federal government will take much of the financial responsibility for providing for refugees out of the hands of the states, Merkel said.

The federal government is to provide €670 per asylum seeker per month, and will also provide €500 million for the building of housing for refugees and €350 million on care provision for unaccompanied minors.

The politicians also agreed that Albania, Kosovo and Montenegro should be considered “safe countries of origin”, meaning citizens of these countries would automatically have asylum applications turned down.

Merkel later praised the deal as a “communal effort” for the sake of refugees.

But Bodo Ramelow, Minister President of Thuringiua from Die Linke (the Left Party) was only partially satisfied with the result.

“The deal has its good and its bad sides,” Ramelow told the Thüringer Allgemeine. The financial packet did not go far enough, he warned. He also let it be known that he had rejected the classification of the west Balkan countries as “safe states.”

Other minster-presidents were happier with the results, with Stanislav Tillich, of Saxony and Torsten Albig of Schleswig-Holstein both saying it was an important step in easing the strain on local government.

Albig described it as a “sustainable solution for a difficult challenge.”

Germany expects to receive upwards of 800,000 asylum seekers in 2015 and many local government have complained bitterly about a lack of financial resources necessary to house and feed the thousands of refugees arriving in their towns.