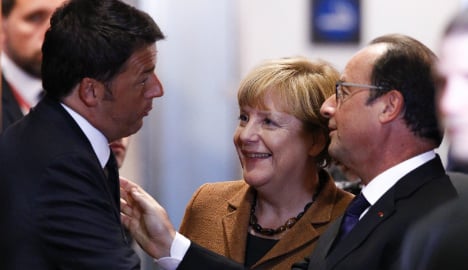 Refugees “have no right to end up in a particular country,” Chancellor Angela Merkel told journalists after the meeting ended in the early hours of Thursday morning.

Leaders tried to find a solution that would put an end to what EU Council President Donald Tusk called “chaos on our external frontiers”, which sees many refugees entering Europe and attempting to evade registration until they arrive in their destination country of choice – often Germany.

Instead, the EU will set up registration centres known as “hotspots” in the countries where most refugees arrive on European soil for the first time.

As well as hotspots in Greece and Italy, there are plans for a third in Bulgaria, Merkel said.

European cash will also begin flowing to the front lines of the refugee crisis, with €1 billion earmarked for the UN World Food Programme (WFP) and another billion for direct aid in Turkey.

And the EU's border agency Frontex will be beefed up with more cash and personnel.

The total planned spending has been doubled from the amount leaders had planned for at the beginning of 2015, to €9.2 billion.

But the moves were not enough for some leaders, including Hungarian Prime Minister Viktor Orban, who threatened to close his country's border with fellow EU member Croatia.

Orban argues that the EU has failed to collectively secure its borders and that refugees are breaking international rules.

And he made a further stab at critics of a recently-completed fence on Hungary's border with Serbia, saying that “if you don't like the fence, then we can also let refugees through on their way to Austria and Germany”.

Tusk acknowledged that “as you can imagine, discussions between the Hungarian Prime Minister and the Austrian Chancellor [Werner Faymann] were very energetic” behind the scenes.

Faymann has accused Hungary of already ignoring the EU's so-called “Dublin” rules to allow refugees through to Austria without first registering them.

“There are points of agreement, but also many different analyses,” Merkel said of the EU's relationship to Orban – who was invited to Munich by her Bavarian allies on Tuesday in a deliberate prod at the Chancellor.

“Where we agree is that we're completely unified on the fact that the defence of the external borders is necessary,” she continued.

EU leaders will meet again for a scheduled summit in three weeks' time and continue their discussions.

No let-up for Merkel

Merkel will have little time to recover from the hours of Brussels talks, as she heads into a fresh summit in Berlin with the leaders of Germany's federal states.

The minister-presidents want to squeeze billions more in cash out of the federal government to help them cope with the 500,000 refugees who have arrived in Germany so far this year.

“We need a sustainable system of financing that measures up to the number of people who are coming to us,” Schleswig-Holstein leader Torsten Albig said.

Meanwhile, Rhineland-Palatinate minister-president Malu Dreyer said that “the most important part for me is that asylum processing be sped up”.

The federal and state governments are expected to thrash out a comprehensive refugee deal at Thursday's meeting covering how costs are shared.

The €3 billion of federal money promised to the states for refugee support in 2016 already looks insufficient as the numbers arriving continue to rise.

Dreyer said that she was hoping the cash injection would be increased to €5 billion, while Brandenburg minister-president Dietmar Woidke pushes for €6 billion.

Hoped-for changes in the law will include designating Albania, Kosovo and Montenegro as “safe countries of origin” from where no asylum applications will be granted.

Refugees may also be held in government accommodation for longer and supported with more in-kind benefits rather than cash.

And the recently-appointed head of the Federal Office for Migration and Refugees (BAMF) will present his plan to deal with the 275,000-person backlog in asylum applications that saw his predecessor step down.