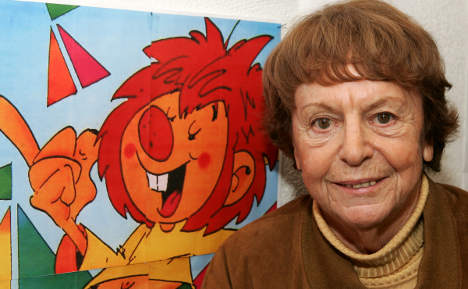 Ellis Kaut in front of a Pumuckl illustration. Photo: DPA

Kaut gave Germany one of its most iconic children's characters, the little elf Pumuckl, who first appeared on Bavarian state radio in the early 1960s.

Later she would write books about the cheeky elf and his high-jinks and in 1982, the television series Master Eder and his Pumuckl first appeared.

The series was an early example of bromance comedy: as the goodhearted Eder, a Bavarian carpenter, put up with the peccadilloes of his unconventional young lodger, who was strangely attracted to shiny objects and untidiness, but hated cheese (“rotten milk”) and garden gnomes. Kaut was born in Stuttgart in 1920, but moved with her parents to Munich at the age of two. After studying acting, she began to work on radio as a narrator for children's programmes.

In 1961, she brought Pumuckl to life for the first time as the hero of a radio book for Bavarian Radio.

But the naughty elf wasn't Kaut's only creation – she was also well known for the character Kater Musch – a talking cat who appeared in 120 audio book episodes.

The author died after suffering from a long illness at an old person's home on the outskirts on Munich.

On Twitter, #Pumuckl was trending at number two in Germany on Thursday afternoon as people who grew up with Kraut's books paid their respects.