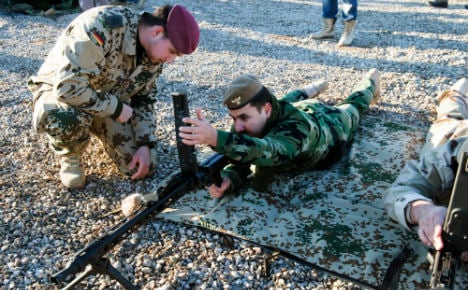 A German soldier trains a Kurdish Peshmerga fighter to use an MG3 machine gun made in Germany. Photo: DPA

Soldiers found Colonel Stephan Spöttel, 56, dead in his room at the “Cristal” hotel in the Kurdish capital city Erbil.

“We are currently proceeding on the assumption that he died of natural causes,” a spokesman for the Bundeswehr headquarters in Iraq said on Wednesday.

Spöttel's next of kin have been informed and his deputy, Lieutenant-Colonel Jan Heymann, has taken over command of the mission, a Bundeswehr press release said.

One hundred and four German troops are currently stationed in Erbil, where they are training Kurdish Peshmerga fighters to use weapons provided by the German government to fight Isis.