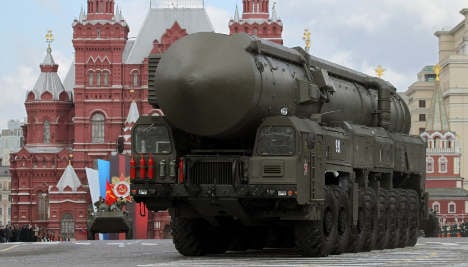 Russian President Vladimir Putin's spokesman warned that Russia would be forced to re-establish “strategic balance” if the US carries out plans recently reported in the German media to strengthen its nuclear arsenal in Germany, reports Spiegel.

According to a report by broadcaster ZDF published on Monday, preparations are currently underway at the Büchel military base in Rhineland-Palatinate to station 20 new nuclear bombs there.

The broadcaster claims to have seen copies of the American budget which prove that the new Type B 61-12 atomic bomb will be stored at the base and German bombers will be equipped to carry them.

In the event a nuclear attack, German pilots would fly the bombers as part of Natos' “nuclear participation” strategy.

A spokeswoman for the Russian foreign ministry told ZDF that such a move would break international treaties as it would amount to spreading nuclear weapons to countries not permitted to use them.

“We are unsettled to hear that states which don't possess nuclear weapons would carry out nuclear operations under the remit of Nato's nuclear participation strategy,” she said. “That is a contravention of Articles 1 and 2 of the nuclear non-proliferation agreement.”

In 2010 the Bundestag (German parliament) voted by a clear majority for the government “to work for the withdrawal of American nuclear weapons from Germany.”

In the coalition agreement of 2009 between the CDU/CSU and FDP it was also agreed to pull nuclear weapons out of Büchel airbase.

But the government recently confirmed that a further €112 million will be invested in Büchel to modernize take-off and landing procedures, suggesting nuclear weapons have a long term future at the site.

Former undersecretary at the Defence Ministry, Willy Wimmer, told ZDF that the plan to send more atomic bombs to Büchel was a “provocation.”

The Christian Democratic Union (CDU) politician described it as a “new option of attack against Russia” which is an “intended provocation of our Russian neighbours.”