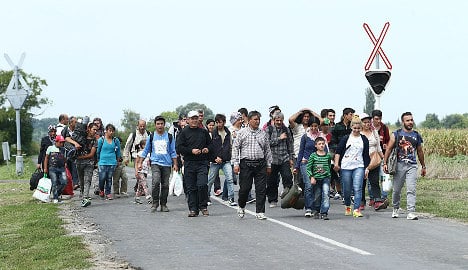 Germany is under investigation for infringing EU laws on minimum standards for asylum procedures and living conditions for refugees.

“In Europe everyone must uphold the commonly agreed standards, in the way we receive asylum seekers,” said Migration and Home Affairs Commissioner Dimitris Avramopoulos in a statement.

“These standards need to be fully implemented and respected, while always respecting the dignity and human rights of the applicants.”

A total of 40 violations are being investigated among the 19 countries, which include Germany, France, Italy, Austria, Spain, the Netherlands, Sweden and Hungary.

“The pieces of legislation concerned focus on fairer, quicker and better quality asylum decisions (the Asylum Procedures Directive); ensuring that there are humane physical reception conditions (such as housing) for asylum seekers across the EU (the Reception Conditions Directive); and clarifying the grounds for granting international protection,” the Commission said in a statement.

The investigation comes as EU leaders are meeting on Wednesday for an emergency summit about the ongoing refugee crisis across the continent, where they will be discussing border security, aid resources and a plan to redistribute 120,000 refugees among member states.

Denmark, Ireland and the United Kingdom will not face scrutiny because they do not take part in EU asylum legislation.

The countries under investigation will first receive a letter of formal notice from the Commission and then will have two months to respond.

If they do not properly implement existing EU laws, they will be threatened with an indictment in the European Court.

On Tuesday, EU interior ministers voted on a plan to share responsibility for refugees across Europe through a quota system.

Talks have been divisive on how to handle the crisis – the worst of its kind since the Second World War.