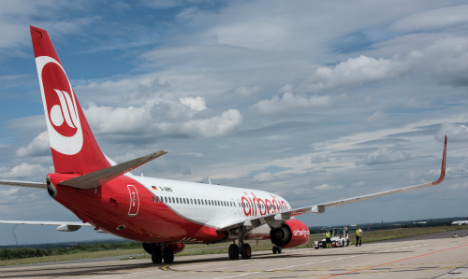 “When the flight took off in Düsseldorf pieces of the tyres broke off and damaged the wing,” an Air Berlin spokeswoman told Bild.

“There was no damage to the plane's systems and no danger for passengers,” she added.

The Airbus plane had 171 passengers and seven crew on board.

Chunks of rubber had flown up with such force from the ground that they punched a hole straight through the wing – although luckily, the damage was to a hollow section which did not contain fuel tanks or the aircraft's electronic or hydraulic control systems.

That meant that a repeat of the famous 2000 Concorde accident – when 113 people died after tyre fragments damaged fuel tanks and electronic cables – was avoided.

Luckily the vigilant ground crew in Düsseldorf noticed the pieces from the tyre on the taxiway and let the crew know, prompting them to land immediately in Munich.

Experts from the Federal Office for Air Accident Investigations (BfU) in Braunschweig will now look into the case.