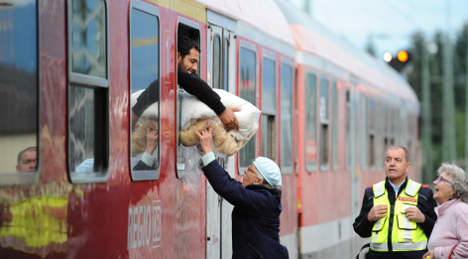 De Maizière, of the Christian Democratic Union (CDU), made the comments to public broadcaster ZDF's Berlin Direct show, as the federal government prepares to meet state premiers at a summit on Thursday.

But he refused to provide concrete numbers on the exact amount of money involved.

The government has recently promised the states an additional €3 billion for the coming year to cope with the hundreds of thousands of people currently arriving in the country seeking asylum.

But regional politicians have argued that this sum was not enough and have called for double that figure to be put on the table.

According to Die Welt, the government is considering providing money based on a per-head system, which would see states receiving government funding in direct proportion to the number of refugees housed within their borders.

Yasmin Fahimi, General Secretary of the Social Democratic Party (SDP) – the smaller party in the governing coalition – reassured the states in an interview with the Pasauer Neue Presse that financial support would be provided.

“We need to come to a solution which is based on the most recent figures for the number of refugees entering the country,” she said.

The government has estimated that 800,000 people will seek asylum in Germany in 2015, although Vice-Chancellor Sigmar Gabriel recently cautioned that this number could rise over the million mark.