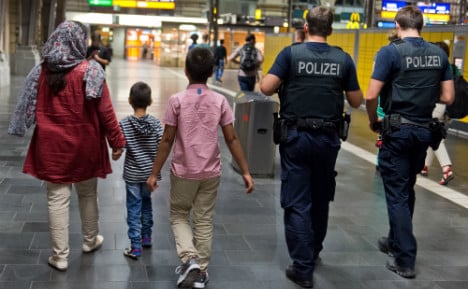 A refugee woman and her children are escorted through Frankfurt station by police in August. Photo:DPA

German authorities received 80,900 applications of the 213,200 made across the EU between April and June according to Eurostat data published on Friday morning.

That was an 11 percent increase over the 73,120 applications made between January and March, compared with a 15 percent jump across the entire Union.

Germany was far from being the country that saw the largest proportional increase, with applications increasing by 159 percent in the Netherlands, 123 percent in Latvia and 79 percent in Austria.

Hungary was the European state with the largest number of asylum seekers relative to its population, at 3,317 per million inhabitants.

Germany's Federal Office for Migration and Refugees (BAMF) had previously reported that in the year to August the country had received a total of 213,302 first-time applications, of which around a quarter were from Syria at 55,587.

That was a larger share than the European total of 21 percent of asylum applicants from Syria.

BAMF president Manfred Schmidt resigned on Thursday for “personal reasons”, although some political observers believe he has been been pushed out.