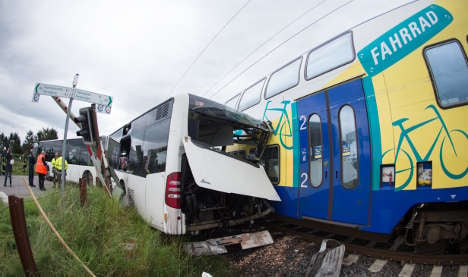 In the end the only serious casualties of the crash were the two vehicles. But things could have been much worse on Wednesday morning when a regional train rammed into a school bus which stood immobilized on a regional track in northwest Germany.

The 23-year-old bus driver was immediately hailed as a hero after police reported that she had successfully evacuated the 60 school children on board.

The children were able to watch the crash from a safe distance and some even filmed the incident, but they escaped with seconds to spare from what would have almost certainly been a fatal situation.

Now though some of the school children have told local newspaper the Stader Tageblatt that the real hero was a fellow pupil – and they even accuse the bus driver of being too slow to react.

The school children say that before evacuating them to safety, the driver called the rail operator and only opened the front door of the extended bus – the door which was closest to the tracks.

When the children intervened, the driver opened that middle door and only after they began to scream did she open the back door.

The teenagers said that the person who should be hailed for his cool head was 13-year-old pupil Philip Meyr, who had the clearest view of the oncoming train and shouted “we need to get out of here” before leading the rest of his classmates to safety.

The bus was incapacitated by a technical failure in a mechanism which joins the front section of the extended vehicle to the back. The bus operator claims that the vehicle had worked without problems for nine years.

The train driver saw the broken down vehicle as the train was around 400 metres away. Although he pulled the emergency brake immediately, the locomotive was still travelling at a speed of around 40 km/h at the point of collision.