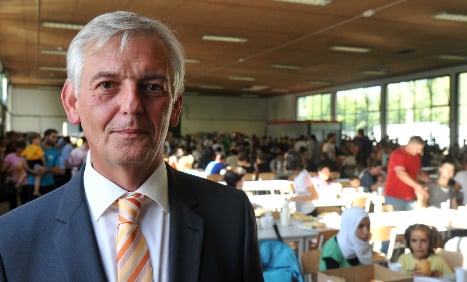 Manfred Schmidt at a BAMF facility in Baden-Württemberg in August. Photo: DPA

An Interior Ministry statement said that Manfred Schmidt had made the decision “for personal reasons”.

Interior Minister Thomas de Maizière said that in Schmidt, the BAMF was losing a leader who had done “outstanding work”.

But the BAMF has come under criticism from across the political spectrum in recent months for its slowness in processing asylum applications.

The Nuremberg-based authority has a backlog of around 250,000 applications.

“The dramatically increased numbers of asylum seekers in Germany have set a huge challenge for the BAMF as well as for states and local authorities,” the statement read.

Schmidt had been president of the BAMF since 2010 and “has always acted in a level-headed and prudent way”, it continued.

So far there is no news of a successor to Schmidt at the head of the BAMF.

The migrant influx to Germany has risen sharply again, days after the introduction of border controls, with police counting 9,100 irregular entries on Wednesday, up from about 6,000 the previous day.

Federal police said Thursday that “almost all came from Austria”, with about 2,000 arriving on trains on Wednesday and the rest by road or on foot, three days after Germany introduced passport checks on borders Sunday.