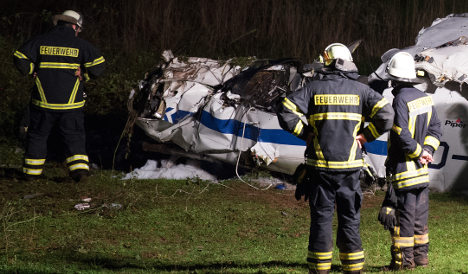 A small aircraft crashed in North Rhine-Westphalia, but investigators are stumped about the pilot's whereabouts. Photo: DPA.

Police and emergency responders are stumped by the mystery of what happened to the pilot of a small airplane that crashed on Wednesday.

Witnesses told police they saw the aircraft perform a few turns in the air before it crashed down to the ground in the town of Mechernich, North Rhine-Westphalia.

But when emergency services arrived at the scene, there was no sign of a pilot in the cockpit or in the area nearby.

Investigators also are uncertain whether there may have been another person sitting in the plane's second seat.

Officials are operating under the assumption that the pilot may have jumped out of the aircraft before it crashed.

The airplane was registered at an airfield near Aachen, around 60km away from the crash site.