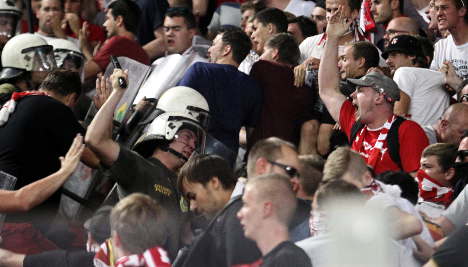 Video has emerged of Greek police using what appears to be excessive force to control Bayern Munich fans before a match between their team and Olympiacos Piraeus.

Officers can be seen repeatedly beating unarmed fans, with one clearly being struck several times across the back.

The fans had to be treated for wounds by emergency services outside the grounds and one was taken to hospital after suffering a head wound.

TZ reports that Bayern 'Ultras' – hardcore fans sometimes associated with violence – wore masks as they shouted abuse and made aggressive gestures to Olympiacos fans in the stadium during the build up to the game.

But one fan told TZ that the police reaction “had nothing to do with football.”

The police response has led Bayern to make an official complaint to UEFA, reports Bild.

A spokesman for the club said that “there was unnecessary provocation from our side and the disproportion use of batons from the police on the other hand.”

After political relations between Germany and Greece have been badly damaged by bitter negotiations over Greek debt in recent months, the game was designated by police as high risk. Bayern fans and even the German press were taken to the stadium under police protection.

“These are not pretty pictures, especially as during the day there were no incidents in the city,” he said. “Perhaps the police are accustomed to intervene due to the heated derbies here.

“I regret to see these images and one has to wonder if perhaps the police overreacted somewhat?”

“We played incredibly well,” said a delighted Pep Guardiola, the manager of Bayern, after the victory.

“I know that lots of people take it for granted that Bayern would win against Olympiacos here – but not me. You only need to look back at Athletico Madrid, Juventus and Malmö and how they played here,” said the Spaniard, referring to the three victories Olympiacos collected in the group phase of the competition last year. A brace from Thomas Müller sandwiched a lashed effort from substitute Mario Götze to ensure the German champions walked away with all three points.

Müller's first came in the 52nd minute and looked as if it were intended as a cross, reports ESPN. His second was a penalty in stoppage time of the second half.

Speaking after the match, Bayern's star forward said “no one picks up points easily here, you really have to fight for them”.

The Bavarian giants' next match is a home game against the Croatian side Dynamo Zagreb who beat Arsenal FC of England 2-1 on Wednesday.

“We've got three points and now a home match coming up so things are looking pretty good for us,” said Müller.

Javier Hernandez scored on his first start for Bayer Leverkusen in their 4-1 rout of BATE Borisov on Wednesday as the Germans topped Group E ahead of Barcelona.

Turkey midfielder Hakan Calhanoglu netted twice in the rout as Bayer put the Belarus side to the sword in their opening Champions League tie.

“That was a good start to the Champions League and a very important win for us,” said Leverkusen coach Roger Schmidt.

Calhanoglu netted a late penalty as the hosts dominated, using their 65 percent possession to fire in 20 shots on goal to BATE's paltry two efforts.

Hernandez's goal was no more than the 27-year-old ex-Manchester United and Real Madrid forward deserved as 'Chicharito' justified replacing Stefan Kiessling in Leverkusen's starting line-up with an impressive display.