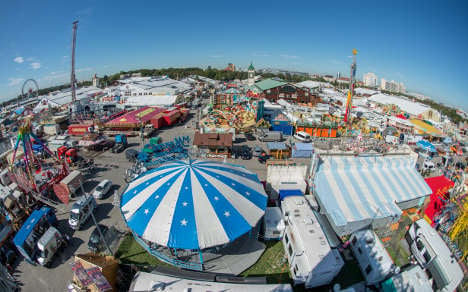 That is the number of beers which were consumed at Oktoberfest last year. Which sounds a lot, but it's only 400,000 for each of the sixteen days of the festival. Or to put it another way, that amounts to a measly 126,000 barrels of the frothy drink.

Then again, that might well be an undercount – allegations emerged earlier this year that festival operators were massaging the numbers to improve Oktoberfest-goers' drunken image. There's only one thing that sell better than beer. Photo: DPA

Okay, so maybe it is actually quite a lot. In fact we've no idea how there is space in Bavaria to grow anything other than hops.

But when you consider how many people visit the Wiesn festival grounds , it really isn't that much…

… In 2014 6.3 million people went to Oktoberfest, meaning the average person only consumed slightly over one litre of beer – making the whole event seem rather tame.

Visitors came from the world over. While no one will be surprised to hear that many traveled from Italy, the UK and Australia to get a taste of some of the world's most famous beer, data also shows guests from less hedonistic countries such as Egypt and India. If you are planning a trip best avoid the last weekend, when the site gets so crowded that nearest underground station can be shut down and the overflowing tents are closed to new visitors.

As everyone knows, beer makes you hungry. So it shouldn't be too much of a surprise to learn that in 2014 in the Ochsenbraterei – the cow roasting tent – 112 cows were put on a spit.

And 48 calves were given the chop, too, as guests made the most of Bavaria's well known love of eating large quantities of roast meat, normally accompanied by potato dumplings and thick gravy. While this jump over the 10-euro mark is eye watering, it's also true that glasses at Oktoberfest hold a liter of beer, which – at around 6 percent alcohol – is made especially strong for the festival.

And it's not just beer that'll put you out of pocket at this year's event – a liter of popular German soft drink Spezi is €9.10, lemonade comes in at €8.80 while even water will cost you €8.

So you'd be advised to make sure that an empty wallet is the only thing – beyond the obvious! – giving you a sore head the next day. In other words, best not be one of the 530 people whose wallets were handed in to police.

Other items lost in 2014 included 770 pieces of clothing – showing that the bad weather didn't dampen the Bacchanalian spirit – and 400 lost keys, meaning nights spent in hotel hallways were none too rare.

Then there is the suspicious case of two wedding rings which were discarded. One would assume they had nothing to do with the set of dentures that were also handed in. Talking of people sleeping in front of hotel room doors, those rooms don't come cheap, either.

A study published on Thursday by rental company Wimdu shows that among the top 50 hotels in Munich, the average hotel room is 184 percent more expensive during Oktoberfest than at other times of the year.

The leader in this hall of shame is the Hotel Ambiance Rivoli which has put prices up by a quite incredible 623 percent, meaning a room that would have cost €44 per night on a normal weekend will now set you back €318.

This is the amount in euros a waiter can earn during the festival, according to the Münchener Abend Zeitung.

While waiters and waitresses don't like to talk about the figures involved, it is rumoured that the incredibly intense work which goes on late into the night and starts early in the morning is dully rewarded for those who have the stamina to go the distance. Waiting at Oktoberfest can be lucrative if you have the stamina. Photo: DPA