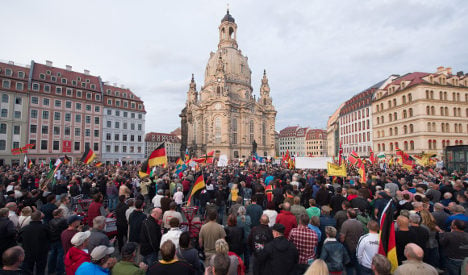 An estimated 500 people marched for Legida in Leipzig on Monday in a protest that soon devolved into violent clashes, injuring two officers as Legida demonstrators started hurling objects like bottles and fireworks at police.

Some of the Legida marchers were masked while others appeared to be violent “football clientele”, a police spokesman said, though he did not call them hooligans.

Police used batons, tear gas and even set up a water cannon against protesters.

Pegida supporters in Dresden – where the anti-Islam movement began – also formed a protest on Monday, drawing more than 5,000 people for the first time in months.

Co-founder and leader Lutz Bachmann told supporters at the demonstration that he wanted to establish Pegida as an official political party to run in local, state and federal elections.

A supporter of the Pegida movement, Tatjana Festerling, was a candidate in the Dresden mayoral election earlier this year before she announced her withdrawal after garnering 9.6 percent of the votes.

Bachmann had previously stepped down as leader after a photo surfaced of him styled as Adolf Hitler, but he was later reinstated.

Pegida – “Patriotic Europeans against the Islamization of the West” – was founded last year, but support for the group has waned since mass demonstrations at the beginning of the year drew in up to 25,000 people.