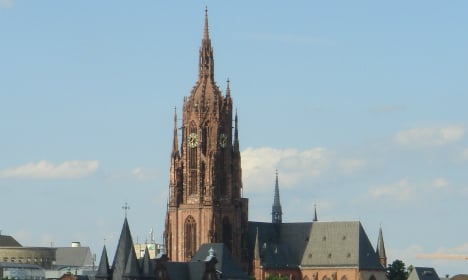 The Frankfurt cathedral at the heart of the old city hides many of its ancient secrets. Photo: "Frankfurter Dom Eiserner Steg" by rupp.de via Wikimedia Commons

The 1992 find of a double grave during excavations at the Bartholomaeuskirche – generally known as the Frankfurt cathedral – wowed historians.

Two children around four years old, one dressed and bejewelled in the style of Merovingian nobility – the kings who ruled the Franks (Germanic tribes) of western Europe in the early Middle Ages – and one cremated in a bearskin according to Scandinavian custom, were found buried in a single coffin under the cathedral.

Twenty years later, archaeologists have released the results of their scientific investigation of the remains and the grave site.

It shows that the pair were buried some time between 700 and 730 AD in a priest's residence near what was then a tiny church.

And it seems that the grave was honoured by the people there for over a century, as the palace chapel built by King Louis II in 855 was exactly aligned with the grave – and passed on its alignment to the later cathedral. A map of the grave site (red square) on a floor plan of the Frankfurt Cathedral. The small building where the children were buried is marked in dark red. Image: Archäologisches Museum Frankfurt

“We don't know exactly why they were honoured, that's the real question,” Professor Egon Wamers, director of the Frankfurt Archaeological Museum, told The Local.

“One can assume they played a significant role in this aristocratic class in Frankfurt…we know of a number of these 'Adelsheiligen' [noble saints] in the early Middle Ages. Educated, high-class people had easier access to saintly status.”

Fine clothing found on the girl's body, including a tunic and shawl, and jewellery made of gold, silver, bronze and precious stones – including ear and finger rings, armbands, a necklace and brooches – are clear indicators of her high status.

Meanwhile, the cremated child's remains, mixed with the bones of a bear, and the girl's necklace copying a Scandinavian amulet, are further evidence of the close connection between Germanic tribes and northern Europe that had developed over the previous century. An artist's impression of how the girl found buried under the cathedral might have looked. Image: Archäologisches Museum Frankfurt

The combination of pagan and Christian elements in the burial is a reminder of the slow spread of Christianity into Germany.

Just a few years later, in a letter written in 738 AD, Pope Gregory III complained about the pagan practices of the Hesse and Thuringian tribes.

“These could have been two children from totally different cultural traditions who were promised to one another in marriage,” Wamers said – although he was clear that historians have little beyond speculation to go on.

Frankfurt -. then known as Franconofurd – “had already been held by the Romans and others as a strategically valuable location” before the Merovingian kings of the Franks, Wamers explained.

Located on a hill and at the meeting of important north-south and east-west trade routes, Franconofurd was the capital of a tax-collecting district, a bridgehead for the Franks' eastward expansion, and a site where the itinerant kings of the Franks would set up their court when they travelled through the area.

“It was constantly being built over or rebuilt. There were high-quality stone buildings, a church, a large administrative structure, and outlying farms and fishing villages,” Wamers said.

“By 794 AD, when Charlemagne held his Great Synod here, it was well enough fitted out for his entire court.”

But the two children were the first human remains ever to be found from the settlement before that well-documented event, and details about life in Franconofurd remain mostly shrouded in mystery.

Frankfurt archaeologists haven't given up on trying to find out more about the early medieval history of the city – although currently most of what is known about the period comes from later records about transfers of land and other property, which include scraps of historical information.

“We've been hoping for a long time for finds made of precious metals from the ninth and 10th Century,” Wamers explains.

“We have very few high-value finds, like Carolingian swords or graves of men, almost nothing in Frankfurt made of metal that could give us more information about what was going on here.”

Even now, plans are afoot to begin new digs around the cathedral complex where the royal palace once stood.

“We'll see what we manage to find,” Wamers said. “Just in the last two years we've found more palace walls, also from this period in the sixth or seventh centuries.”

Lurking in the new dig sites could be more clues to the history of Frankfurt – but it's unlikely we'll ever know just what became of the two saintly children who lay under the cathedral for so long.