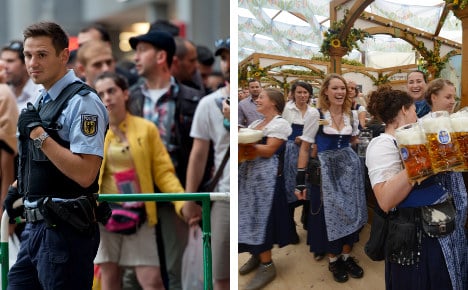 It was the news everyone had been dreading for weeks as Germany's federal states complained of an unmanageable number of refugees arriving: the country reintroducing controls along the Austrian-Bavarian border on Sunday.

In fact, despite the hysterical headlines about Germany “closing its borders” in the international press, refugees are still getting through and being brought to emergency accommodation centres in the Free State of Bavaria.

The move to tighten controls does represent the governing Christian Social Union (CSU), Angela Merkel's conservative allies in Munich, getting some of what they've been demanding at increasing volume as the number of refugees arriving has grown.

One columnist writing for Handelsblatt has called for people to boycott Oktoberfest as a way of protesting against the Bavarian government's supposed anti-refugee stance.

But that would be to completely misunderstand the situation and lash out at exactly the wrong people.

It was ordinary Munich people who arrived in droves at the Bavarian capital's rail station to bring food and simply welcome refugees into Germany last weekend.

Munich's authorities and police worked hard to make sure that those arriving didn't end up living in miserable conditions in the station or on the street – as was happening in Budapest – but were properly processed and given a roof over their heads. Soldiers from the Bundeswehr (German army) set up tents in the Munich district of Unterhaching for refugees on Monday. Photo: DPA

And on Monday after the announcement of the tougher border controls, when he had achieved a dearly-held wish, even CSU leader Horst Seehofer said that more money should be spent on refugees and that Bavaria was just asking for a breathing space to get its response in order.

Seehofer has himself been far from the only state premier to slam Angela Merkel for her openness to taking on refugees, and the Chancellor is chairing what promises to be a tumultuous meeting of state leaders on Tuesday night.

Oktoberfest brings huge amounts of cash to Munich's businesses, from the giant breweries and hotel chains to the ordinary people running food stalls or renting out rooms on Airbnb.

Those people and companies don't deserve to suffer for the acts of their government – many of them may not even have voted for Seehofer (Munich has a mayor from the Social Democratic Party).

It's the very economic strength of Germany – powered in part by events like Oktoberfest that draw millions of visitors – that makes it able to confidently say “welcome” to so many of those now fleeing war.

And the fact that six million people come to Bavaria from all over the world to help polish off the best part of ten million litres of beer gives the lie to the idea that the Free State is closed-off to foreigners.

In fact, it's one of the many cultural institutions that has helped assure the same glowing reputation that even now is drawing refugees to seek asylum in Germany – and which keeps other nations keen on trading with the Federal Republic.

The refugee crisis is far from solved, and Germans shouldn't be patting themselves on the back about it just yet.

There is a massive uphill battle to be fought to bring all of Europe on board with Germany in dealing with the crisis – and difficult choices to be made about how to fight the things people are fleeing from.

But Munich has earned its Oktoberfest this year of all years, and should celebrate it proudly before getting back to work.